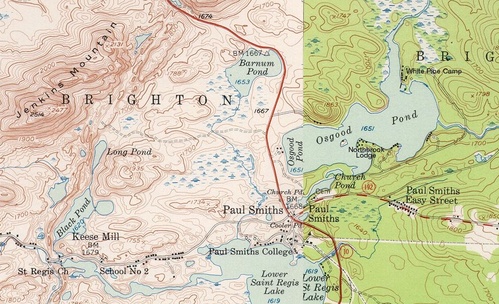 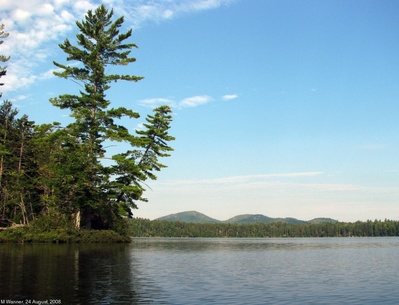 Osgood Pond, 2008 Five hundred acre Osgood Pond is in the town of Brighton, near Paul Smiths, New York. It is the site of White Pine Camp, which served as the Summer White House in 1926, and the historic Northbrook Lodge, possibly the first camp on the pond; both were built by local builder Benjamin A. Muncil in the early 1920s.

In the early 1850s, James Wardner and his brother Seth and a friend, Lorenzo Rand, camped all winter in a log cabin on Osgood Pond. They did well with hunting and trapping and James earned enough to buy land for a farm on his chosen site at Rainbow Lake in 1855. According to Wardner, they named the pond after Arthur Osgood, the first person to attempt farming in the region. 1

In 1879, Marc Cook, with Paul Smith's help, went into Camp Lou on Osgood Pond to attempt to cure his tuberculosis.

Paul Smith's Hotel had a golf course on Osgood Pond, but it was too sandy and too far from the hotel to be satisfactory; the golf house on Osgood was used by local Boy Scouts and Girl Scouts in 1932.

The handsomest camps in Osgood Pond are owned by Mr. Hans Beatty and Mr. A. D. Juillard. In all these mountain homes, the sleeping apartments are tents, generally about 14 ft. square, covered by different colored flies, and erected upon platforms raised about 3 ft. from the ground.

Thanks for fighting fire at Osgood Pond

I write to express my family's deep appreciation to the fire departments of Paul Smiths-Gabriels, Saranac Lake, Bloomingdale and Lake Placid for their speed and effectiveness in containing the fire at our camp on Osgood Pond early Monday mornng. While we are devastated by the loss of the main lodge, the dedication and professionalism of these firefighters spared most of our trees and buildings, leaving us hope and the determination to rebuild here in what has been my family's second home for 130 years. Martha Butler, for Cranford Camp

Excerpts from Beech Hill Camp: A Glimpse into its Past (photocopy, source unknown)

On Osgood Pond, there are four turn-of-the-century camps: White Pine Camp; Northbrook Lodge; "Camp Lu," [sic] a family camp known now as Wanakewin, the oldest camp on Osgood); and our own Beech Hill Camp. In October. 1905, Harrison G. Otis and his wife, Mary Brooks Otis of Cleveland, Ohio, purchased property on Osgood Pond from the Paul Smith's Hotel Company. . . .Construction commenced immediately and in the late spring of 1906 the living room building was completed. It's likely that family and guests were housed in tents until other buildings were completed. [Harrison G. Otis may have been the Otis of Otis Elevator Company. Handwritten notes say "Yale 1920" and "Beech Hills Farm, Willoughby, Ohio [Agr.]"] The Otis' continued to enjoy the camp (any formal name unknown) until February, 1916, when Edwin Drexel Godfrey and Florence Withrow Godfrey, his wife, of Irvington on Hudson purchased it as a family camp.

Many changes were made under the Godfrey stewardship. The owner's cottage with its use of half-logs for interior walls may have been built under the direction of Ben Muncil. Interesting "whipped cream" stucco was used above the wainscoting and above the ceiling in the entrance room, and there was a screened sleeping porch, as is found in the Saranac Lake cure cottages. The canoe house with its hint of Japanese influence, also boasts the "whipped cream" stucco on its exterior.

Gardens with perennial flowers and shrubs spread color everywhere. Fountains and fish pools made the grounds sparkle, the beauty of the camp shimmering in the Victorian gazing globe on the main lawn adjacent to the diningroom building.

It was all here . . . chauffeur's quarters and garage with its gasoline pump; guide house for the fishing rods, guns and a place for hanging game; woodshed and woodshop; boathouse; and pump house with pump to push water up the hill to the two cisterns. The pressure was sufficient to bring water to each building in the camp and to provide fire protection.

There was also an English red clay tennis court, and a rustic cabin with stone fireplace and cozy windowseats that housed a snooker table. Guest cottages overlooking the lawn were connected by walkways that ran throughout the camp. Beautiful stone walls and stone gutters carried rainwater away from road and walkways. The entrance road ended at the turn-around and flagstone walks guided you to other guest cottages and to the lean-to and tea house at the eastern end of the camp.

The Godfrey family summered at the camp and invited children living on the lake to visit with their children. World War II erupted and in the course of the conflict, two Godfrey sons were lost.

In 1944, the Godfrey Camp was named Camp Osgood, Inc. and run as a boys' camp by  Florence Withrow Godfrey until 1950. A Brooklyn, N.Y., lawyer and law clerk to a Supreme Court judge purchased the camp in June, 1950. Harry and Lynna Reiss were principals in Beech Hill Camp, Inc., which we know today as Beech Hill Camp. The Reiss' turned the buildings into housekeeping units and rented them for summer use. Their caretaker, Martin Lyon, supervised the opening and winterizing of the camp. From 1950 to 1957, the Reiss' enjoyed the camp along with the guests, who rented individual buildings and shared the common areas.

When Harry and Lynna grew disenchanted with the camp, they decided to sell. As is customary here in the Adirondacks, camps were sold fully or partially furnished. There were many Mission and Arts and Crafts furnishings remaining from the Otis-Godfrey era which were removed before the camp was purchased by Martin and Elsie Lyon in July of 1957.

By this time, many of the garden areas had begun to revert to their natural wild state as perennials and shrubs died and were replaced by forest and meadow plants. The beautiful stone walls and stone gutters suffered the ravages of forest encroachment and weather. The hard-surfaced road became pot-holed under Martin's bulldozer.

By 1969, Martin and Elsie were thinking of retirement. They decided to subdivide the camp, selling off each individual building, almost all with a portion of lakefront. Martin used his bulldozer to put through a road to the far end of the camp, giving road access to seven properties. A second subdivision was planned for the hillside which housed the cisterns for water and fire protection. He (estimated? illegible) another 12 lots having common beach rights. As soon as it became known that this was the intended purpose for the hillside, the Cranford Island owners purchased the entire hill, thus retaining the lovely unspoiled natural view from their property.

All of the properties were sold. Some of them were bought by families who had come to Beech Hill Camp when Harry and Lynna Reiss were owners and others under Martin and Elsie's tenure. Much of the history is still being researched and gradually we'll be able to piece together the story of our camp.