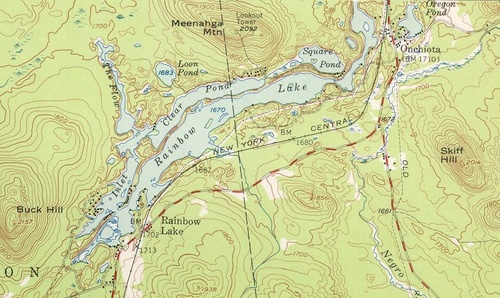 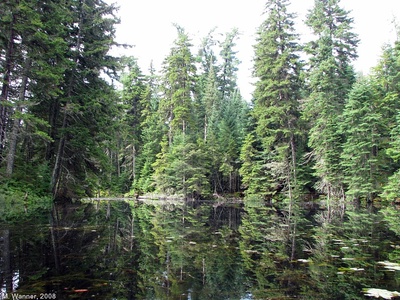 The Flow, near Rainbow Lake 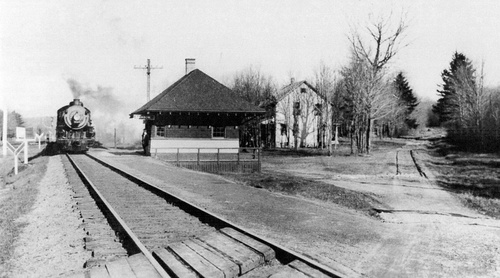 Rainbow Lake Railroad Station. Courtesy of Noreen Oslander.Rainbow Lake is a three-mile long narrow lake in the Town of Brighton.  Clear Pond parallels Rainbow Lake, separated from it by a narrow esker. It is also the name of a hamlet on the southeast shore of the lake on the Rainbow Lake Road two miles north of Gabriels.  Before the railroads ceased operation it could be reached via the New York Central railroad.

It was first settled in 1855 by James M. Wardner, who built the Rainbow Inn there in 1862.  In 1910, the Inn became the Rainbow Sanatorium, established by the Independent Order of Foresters for their members. 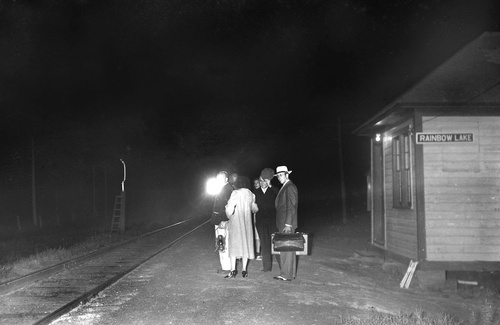 Waiting for Train #4 at Rainbow Lake. A small group of well-dressed vacationers wait for the nightly Adirondack Express at the small station of Rainbow Lake in the summer of 1940.
Courtesy of Tim Mayer…At the head of Rainbow Lake stands WARDNER'S a fine hotel kept in excellent style by J. M. Wardner, son of Nathan Wardner, Keeseville's first schoolmaster, a man of taste and culture, who some thirty years ago, finding his health breaking down under the pressure of professional drudgery fled from civilization and made him a lodge here in the wilderness where he has cleared a fine productive farm, and thoroughly confirmed his original taste for the woods and waters, acquiring great skill in hunting and fishing, which not only serves him well in furnishing the table of his family and guests, but also to while away leisure time he may have upon his hands in the most pleasant and congenial manner…

William: A. Cormier, travelling auditor for the N. Y.Cenral R. R., arrived last Monday with his family from Tarrytown; N. Y. and went into Leonard Camp at Rainbow Lake.  Mr. Cormier expects to spend about three months here in the mountains.

"The Only Rainbow Lake Store," 1910-1913
Courtesy of the Adirondack Experience
An unidentified writer visited the area the summer of 1959, staying at Paul Smith's Hotel.  Paul Smith himself served as guide, as recounted in Dickens' weekly periodical All The Year Round, published on September 29, 1860:

While the rest of the party were fishing, Paul and I, in one of the boats, took the inlet of the pond and followed up the river to its source.  Then, leaving the boat we crossed a two-mile carrying-place to the upper waters of the north branch of the Saranac.  Here we found a beautiful pond six miles in length, called Rainbow, with a long ridge of granite boulders, probably of glacial formation, running along its side.

In this place, I once passed a night with Paul, wrapped in our blankets, with the earth for a mattress and the stars for a canopy, after a weary and unsuccessful night hunt.  It was upon this very ridge, at a point only a few rods in width, where it separates Rainbow Pond from another beautiful sheet of water called Clear Lake.  I was awakened during the night by a sound, wailing and prolonged-now rising quick and sharp like the cry of a dog, again sinking into a moan-which I had not heard before, and which seemed to come from a neighbouring hill.  I awoke Paul to ask what it was.

“Waal neow, them’s wolves.  Sure as you’re alive them ‘ere’s in full chase after a deer, and they’ll never leave him till they run him down.”

“But,” said I, “suppose they should run along this ridge?” thinking we should stand about as good a chance of escape as a driver who should take the railroad track for a highway.  But Smith had dropped asleep again immediately, so I concluded that the danger could not be great, and followed his example. 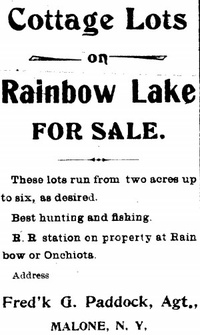