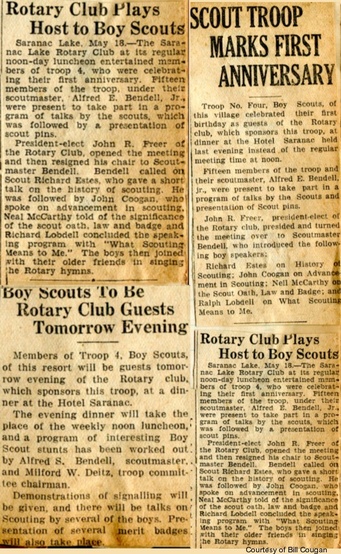 News items on Troop 4, circa 1929, from a scrapbook kept by John G. Coogan

At a meeting attended by about 150 leading business and professional men of the five constituent communities, held at Hotel Saranac, Saranac Lake, on Monday evening, the Adirondack council of the Boy Scouts of America was organized.

The communities in the council are Tupper Lake, Saranac Lake Lake Placid. Malone. and Chateaugay. The purpose of the council is to co-ordinate in one central body all scouting activities in the five villages. National Boy Scout headquarters will work closely with the regional executive assigned to this territory, and it is expected that with an executive to give his full time to this work marked progress will be made in all the villages in this great movement for boy betterment.

As soon an the financial campaigns in Tupper Lake and Malone are finished the paid scout executive will begin his work, troops in the various villages will be organized, and the entire scout program will get under way. Lake Placid, Saranac Lake and Chateau gay have finished their campaigns with quotas reported as satisfactorily raised. Lake Placid even exceeded the figures set for it prior to the money-raising drive…

Arrangements for the establishment of a summer camp for Boy Scouts of the Adirondack Council are being advanced by the executive board and by scout leaders in the council and in connection with its organization a public appeal is being made for the donation of camp equipment, an item which is not covered by the budget of the council.

Several have already responded to the call and scout officials have received a camp stove, two canoes, a catboat and a donation of a check for $10 to be used in purchasing equipment for the camp. These donations are very much appreciated.

In fitting out the camp, equipment of all kinds In the line of tents, stoves, canoes, boats, cots, set-ups for dining room, kitchen equipment, etc., will be necessary. The cost of the necessary tables, cots, tents and benches alone, if they had to be purchased new, has been estimated at about $500, Athletic equipment of every description is also desired, such as basketballs, baseball bats, catcher's mitts, chest protectors, volley balls, etc.

Any person who is willing to donate any of these articles is requested to communicate with the local scout office at 27 East Main street or with any member of the camping committee; Lewis G. Graeves, of Saranac Lake, chairman; Fred Knapp, of Tupper Lake; H. A. Cook, of Chateaugay; Carl Thornton, of Lake Placid, and H. W. Main, of Malone. Communications may also be made Deputy Commissioner M. W. Plumb, of Malone, or Scout Executive H. H. Harmon, of Saranac Lake.

Prospective locations for the camp are already under consideration by the committee and it is expected that the site will be chosen and further details worked out as soon as weather conditions permit. It is expected that there will be over a hundred boys from Franklin County in attendance at the camp this summer and an excellent program of entertainment is being arranged.

BOY SCOUT CAMP MAY BE LOCATED ON OSGOOD LAKE

The matter of selection of a site for the Adirondack Council Boy Scout summer camp was given considerable attention at the meeting of the Executive Board of the organization which was held last week. A. committee com posed of Dr. E. R. Baldwin and Dr. F. B. Trudeau, of Saranac Lake, was appointed to confer with Phelps Smith, of the Paul Smiths resort, on the matter of securing a site on Osgood Lake for this summer's scout camp.

Osgood Lake is one of the prettiest lakes of the Adirondacks and offers ideal facilities for such a camp. The site under discussion is only a short distance from White Pines camp, the camp which was famous a few years ago when President Coolidge summered there.

The permanent location of the council headquarters office was discussed and it was the decision of the meeting to leave the matter in the hands of the scout executive, Frederick L. Wellington, who was instructed to establish the office at such a location as would enable him to give the best service to the council territory. For the present the office will remain at Saranac Lake.

It was derided to deposit fifty percent of the year's budget with the treasurer, Mr. Potvin, of Tupper Lake, the remaining fifty per cent to be deposited with him at the beginning of the second six-months period.

Samuel Edelberg, of Saranac Lake, who has served efficiently as scout commissioner since the organization of the council, was elected as a delegate to the national council which will convene in New York City on May 12 and 13.

Pres. Lamberton presided at the meeting and reports of several troops and troop activities were made. George Shields, of Tupper Lake, local chairman, reported that there f are from three to five active troops in his district which includes Piercefield and Conifer as well as Tupper Lake. He said that there were prospects of from twenty to thirty men at the leadership course this summer. Dr. E. R. Baldwin reported troop conditions in Saranac Lake and it was also reported that Malone had six active troops meeting regularly and the troop at Chateaugay is making good progress.

Mr. Wellington, the executive, gave a brief review of the activities of the various troops through the council during the past month.

Among: those who were present from out of town were Dr. John Hayes, Dr. E. R. Baldwin, Executive Frederick Wellington, Dr. Francis B. Trudeau and R. N. Obenchain, of Saranac Lake; Dr. L. P. Sprague and T. A. Oliver, of Chateaugay; Mr. Noelk, of Conifer; George Shields, Robert Minnich and L. P. Quinn. There was a good representation of Malone men.

A. W. MacCartney of Portland. Maine, formerly chief executive of Pine Tree Council In that district, was named to succeed Frederick L. Wellington as chief executive of the Adirondack Council, Boy Scouts of America, at a meeting of district chairmen of the council held last night In Malone.

Mr. MacCartney is a graduate of the University of California and has had wide experience in scouting. He assumed charge to affairs in Adirondack Council today. Plans have already been formulated to open Camp Osgood, Boy Scout camp on Osgood Lake, on July 15th. All Boy Scouts in the council who are interested in going to camp this summer are urged to get in touch with their district chairman or with the headquarters office In Malone.

Last night's meeting, which was attended by a dozen representatives' from the various districts of the council, was presided over by Dr. Trudeau of Saranac Lake. Adirondack Council was reported to be in good condition financially.

SCOUT DRIVE WILL BE HELD NEXT MONTH

A council-wide campaign to raise funds for operation of Adirondack Council, Boy Scouts of America, will be conducted during the first week in September. The council budget totals $5,000 and is apportioned among the districts of the council as follows: Malone $1,500; Saranac Lake $1,500; Tupper Lake $600; Lake Placid $500; Plattsburgh $1,200.

Mr. McCartney reported that the camp has been very successful this year. The attendance was somewhat light the first two weeks but more than doubled during the middle period. There were 99 boys in camp last week and the staff had its hands full to look after them. The enrollment for the last two weeks will be considerably lighter.

The question of camp personnel for next year was considered and it was decided that if volunteer counsellors are employed as at present the attendance shall be limited and distributed evenly over all three periods. If a large camp capacity is desired a mature staff of workers will be employed.

The camp lodge is in need of reshingling, and the council voted to have the the camp staff do the work if the shingles are furnished by the owners.

A proposal to send the local Jamboree Scouts to the three-day preliminary training camp at Syracuse, was approved. The council decided also to pay the expenses of the executive to the Jamboree where he will have charge of a part of the program.

A month's vacation for the executive was authorized, to begin after the close of the financial campaign early in September.

On his return from his vacation Mr. McCartney will make his headquarters in Saranac Lake. The question of keeping the Malone office open several days each week will be decided later.

The council budget for the coming year was adopted as follows:

...William L. Distin of Saranac Lake, reporting for that district, stated that Scouting had been a little slack there in the past but that, with the headquarters now located in the village, a revival of interest was anticipated. There are two troops operating, the Episcopal and Rotary. The Presbyterian troop is not now active but plans activity soon. Two new troops are in prospect at Saranac Lake by the Methodist and Catholic Churches. Lake Placid, he stated, now has three troops, Catholic, Episcopal and Community Church troops. Scouting conditions are improving at Lake Placid where Mr. O'Hare has been very active.

Mr. Distin said there were prospects of troops in Gabriels, Paul Smiths, Keese's Mills and Bloomingdale. He said he was much interested in the farm and home patrol arrangements of Scouting which, he felt, might solve some of the problems in the smaller communities.

As the campaign headed by Dr. Homer L. Sampson to raise $1,500 for Boy Scout work in the Adirondack council swung into action Monday, officials of the council reminded the public of the work done by the boys during the past year. The record shows that 192 awards for advancement in scouting were earned by boys of the Saranac Lake District.

Two new troops were formed and at the present time there is need for four more troops. The two new units are Methodist Troop 1 and Sea Scout Ship 206 sponsored by the Saranac Lake Kiwanis Club and headed by Coach Arthur O. Mahoney of the high school.