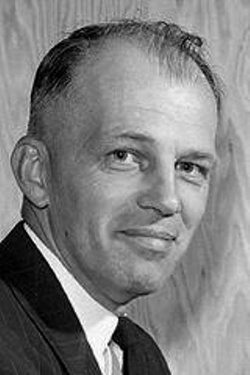 Andrew Fortune, Sr. operated the Fortune Funeral Home for many years.  He was a World War II veteran.

In 1960, he was the recipient of a "district plaque," the highest award a Scout District can bestow upon an adult scouter, having been in scouting for thirty years, starting as a Boy Scout. He was a member of the Boy Scout council executive board and served as council chairman of camping and activities. 1

SARANAC LAKE--Andrew Fortune, 27, a member of this village's oldest families, had three ambitions when he was in knee-pants, and they weren't the three R's. They were to fly, to own his own plane and to become a transport pilot.

Tuesday the young aviator's ambitions will be approaching fulfillment. He will receive his wings and a commission in the United States army air corps. He has been flying for several years, and was part owner of a plane, and soon my be piloting an army transport.

Andy, who won popularity in this village as a bobsledder, a speed-boat driver and an aviation enthusiast, will be graduated Tuesday from Blythville training school at Blythville, Ark. He doesn't know where he will be assigned, but in letters to friends he expressed a desire to be assigned to a bomber squadron and to see some action.

Fortune's spent a lifetime in a business of bereavement

SARANAC LAKE - Andy Fortune Sr. has brought life to a business that deals with death.

The 87-year-old Fortune is the long-time owner and operator of the Fortune-Keough Funeral Home on Church Street.

"I've been in the funeral business for 86 years," Fortune said. "My grandfather died and gave me some stock when I was one year old."

Years earlier, Fortune said his grandfather walked over Whiteface Mountain and wandered into Bloomingdale, at that time a stage depot, with a pack on his back. Somehow, Fortune said, he got involved in the funeral business and the rest is history.

"He was a Ling and he lived on what they called 'the back of the mountain' " he said. "They would farm, shot deer, do what they had to do. I guess he liked town life."

Fortune has been a "townie" his whole life. That's not to say he never left; far from it.

As a young boy, Fortune recalls a Saranac Lake where horses and carriages filled the streets.

"We did the usual kids stuff," Fortune said. "Football, baseball, basketball, fishing and fooling around."

After World War I, however, things changed.

Fortune's mother ran one of the many tuberculosis cure houses in the area. Fortune would help his mother care for up to 18 patients, mostly veterans.

According to Fortune, there were 52 drinking establishments from upper Broadway to Bloomingdale Avenue, and the vets were not shy when it came to visiting them.

"A lot of them drank all the time. Many knew they were going to die and just stayed drunk," he said. "I remember one guy, he didn't eat any food for six or seven years. He just drank."

Fortune would put the man to bed almost every night.

In almost 40 years Fortune has never missed a weekly meeting of the local Rotary Club. That fact alone could bring on stories of a hundred of projects and events. Let's stick to the one about the cotton-candy machine.

In the 1960s Fortune built a trailer, put in a cotton-candy machine and hit local events.

In the years to come the Rotary would add another machine to its arsenal and a snow-cone maker.

In 1942, Fortune enlisted in the Aviation Cadets just a few days before the 26-year-old cut off date.

Fortune eventually became an instructor, teaching young men the ins-and-outs of a B-17 bomber.

His most interesting moment in the Air Corps?

"We had a couple of wrecks," Fortune laughed.

While flying a trainer one night, Fortune's engine overheated and he was forced to spend a little time out on the wing while it was still in flight.

"They (the tower) told me to get on the wing and bail," he said. "I said the heck with it; I think I can save the plane."

He did, but what was he going to do on the wing?

"Jump," he said. "Listen, young man, back in those days airplanes only—went-120-miles an hour. I could have done it if the plane was low enough to the ground."

Parachutes. We'll get to that.

His love of flying did not end with his honorable discharge in 1946. Almost 50 years later, in 1994, Fortune built and flew his own airplane called "Grandpa's Toy." The yellow and red ultralight is stored at the Lake Clear airport.

"I hope to take it up again," Fortune said.

Home from leave in 1943, a young Andy married a beautiful Spanish-American girl named Alvera in Vermont.

Were did the two meet? Where else — a funeral.

"She was too beautiful to resist," he said.

In all the years Fortune ran the Church Street funeral home his two boys, Andy Jr. and Tim, never saw a corpse, except once.

"They came with their class from St. Bernard's School and I let them in," Fortune said. "The janitor had died, and the school kids came over to pay their respects."

Fortune said his son's never became hardened to the business, and that is why, he believes, Andy Jr. (the current director of the funeral home) is so compassionate to his customers.

Finally, at 80 years of age, Fortune got to use a parachute for the first time, but he didn't tell Alvera. She was in Vermont visiting family.

Fortune drove to an airfield in Malone, took a course and jumped twice. He said he loved it so much, he went back the next day.

Fortune only needs two more jumps to qualify to jump from those heights.

Andy was a lifelong resident of Saranac Lake. When he was 17, he left Saranac Lake for New York City, where he became a draftsman. He returned home five years later and graduated with the 1936 graduating class of Saranac Lake High School. He enlisted in the Army Air Corps in 1942, attained the rank of captain and was awarded his wings.

Just before his B17 squadron was scheduled to leave for Europe during World War II, he had a gall bladder attack and had to stay behind. He remained stateside during the war and became an instructor on B17's. He was discharged in l946, becoming a member of the NYS National Guard.

Andy reactivated the NYS National Guard Headquarters Company, 105th Infantry, 27th Division in Saranac Lake April 10, 1947, with only 13 men. Under his leadership, the Company grew to 90 men. He retired from the National Guard in 1951.

Andy became the president and manager of the family business, the Fortune Funeral Home at 40 Church St., in 1946 and operated the business for 23 years until 1969, when his son, Andrew Jr., assumed responsibility.

Andy was very active in the community over the years. He co-owned and operated the Saranac Lake Go-Kart track in Lake Clear in the 1950s and '60s. He was involved in the Boy Scouts since 1927, holding every position from Scout to International Representative. He continued on as a member of the Adirondack Council of Boy Scouts, serving as its president in 1965 and 1966. In 1961, he was awarded the "Silver Beaver," Scouting's highest award. He was a life member, past president and Paul Harris Fellow of the Rotary Club of Saranac Lake. Andy was the driving force behind the Rotary Club "Cotton Candy/Snow Cone Trailer," which he built and donated to the organization. It continues in operation to this day, providing thousands of dollars in Rotary Club support to youth and senior citizen organizations. He was very proud of the fact that he had never missed a Rotary meeting, even while he was traveling. He was a life member of the Elks Lodge 1508, the Knights of Columbus 599, the Loyal Order of the Moose, the American Legion 447, the Experimental Ultralight Aircraft Association, the OX5 Club of America and the Saranac Lake Bobsled Club. He was an accomplished woodworker and in his retirement was known for the duck push toys he built to benefit the Saranac Lake Free Library and Uihlein Mercy Center. Andy never gave up his love of flying. He built an ultra-light airplane named "Grandpa's Toy" at the age of 70 and did his first sky dive at the age of 81. He was also able to take one last flight in a B17 at the Adirondack Airport when he was 90.

. . . Andy Fortune was a leader in establishing the Adirondack Airport at Lake Clear.

Sometime in the late 1930s, Fortune and Lee J. Gladd went to Plattsburgh where their Saranac Flying Club had purchased a new, 65-horsepower Aeronica airplane for $1,750. Fortune flew it back here and landed in a field across from Major Dawson's Bar and Restaurant in Lake Clear.

He was a pilot, a WWII veteran, and after the war he was company commander of Headquarters Company, 2nd Battalion, 105th Infantry Regiment, 27th Division of the United States National Guard when about a dozen of us 17-year-old high school boys joined up in 1947; I served until 1956.

Andy was a tall, handsome guy, a captain with an Air Force patch on his shoulder. (Remember, it was then the Army Air Force.) We were all impressed with him and all our other officers and non-commissioned officers, combat veterans of the war that had ended two years before. . . .