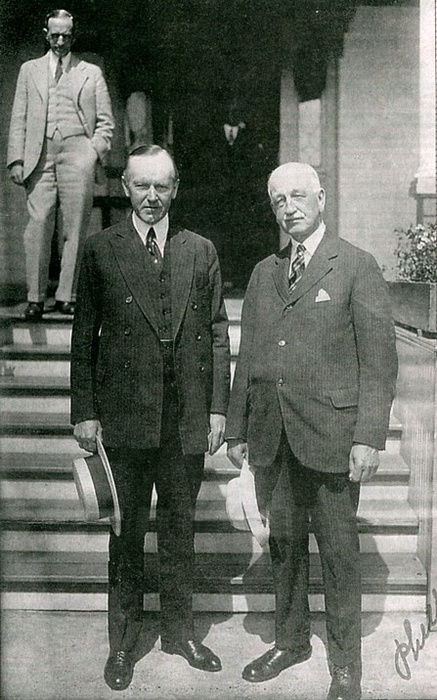 J. Phelps Smith was the second son of Paul Smith, the founder of Paul Smith's Hotel. His older brother, Henry, died in 1891, and his mother, Lydia, died the same year; his father died in 1912. Phelps had disagreements with his younger brother, Paul, Jr., who sold his share of the family business in 1925, leaving Phelps in charge of what was then a growing empire involving the hotel, real estate, electric power, and a short electric railroad. He built the impressive Paul Smith's Electric Light and Power and Railroad Company Complex in Saranac Lake in 1927.

He never married. When he died, he left a $2.5 million estate in trust to support the founding of Paul Smith's College. He is buried beside his father in the St. John's in the Wilderness Episcopal Church.

Phelps Smith, the last member of the Paul Smith family of Adirondack resort fame, died at his home in the Paul Smith hamlet on St. Regis Lake about 11 o'clock Sunday night after an illness of only two days, aged 74 years. Pneumonia was the cause of his taking off. His sudden death was a great shock to his associates.

Mr. Smith was born at Paul Smiths June 4, 1862, and throughout his adult life was engaged In the several businesses started by his father who was credited largely with the development of the Adirondack country as a resort section. His brother, Paul, jr., sold out his interests in 1926 and went to Richmond, Va., to reside. He died there May 14, 1927.

The main building of the Paul Smith's Hotel was destroyed by fire September 5, 1830, while Phelps Smith was vacationing in the Grand Canyon of the Colorado. The hotel had been built about 50 years before. The administration building, casino, store and several small buildings, and all the cottages on the St. Regis Lakes were saved. The company has continued to operate the large establishment as a hotel. The administration building has been remodeled and equipped with a large dining room and sleeping rooms as well as offices.

Mr. Smith never married. He is survived by a nephew, Charles Martin of Plattsburg; a niece, Mrs. A. M. Burnham, Pasadena, California, and an uncle, Fremont Smith of Loon Lake.

WILL OF PHELPS SMITH IS HELD VALID; DECISION PAVES WAY FOR FOUNDING PAUL SMITHS COLLEGE WILL OF FAMED ADIRONDACK HOTEL MAN, DISPOSING OF $2,500,000 ESTATE, WAS CONTESTED BY 22 COUSINS OF DECEASED

The will of Phelps Smith, with its provisions for the founding of the Paul Smiths College of Arts and Sciences in memory of his father, was held valid Monday in a decision by Acting Surrogate Ellsworth N. Lawrence. The will, disposing of an estimated $2,500,000 estate, was contested by 22 cousins of the late hotelman.

In an eight-page opinion, Acting Surrogate Lawrence held all grants to the college, which has already been chartered by the New York State Board of Regents, to be legal and provisions establishing a $100,000 trust fund from which certain beneficiaries are to receive annuities were also held valid.

The decision is of vital importance to the Paul Smiths College of Arts and Sciences, incorporated and chartered last October. The trustees of the new institution, which is designed to provide junior college courses, have been waiting settlement of the will contest before taking further steps toward the opening.

At earlier proceedings in the will contest, counsel had intimated that the decision in Franklin County Surrogate's Court might be carried to the appellate division, however.

Acting Surrogate Lawrence's opinion states that "charitable purpose dominates the whole will," and points out:

"He did not intend that any substantial part of his estate should go to his heirs. And, having no near relatives, he very laudably desired not only to perpetuate his father's name, but to bring the advantages of higher education within the reach of those young people who might not otherwise have it."

Phelps Smith died January 17, 1937, and his will was probated March 22 the same year. At the time of probate, cousins contesting the document reserved the right to petition the court for a judicial construction and, in March of 1938, when the Adirondack National Bank and Trust Company, as surviving executor, (the other executor Judge John M. Cantwell of Malone having died the previous summer) applied for a Judicial settlement, the cousins sought a judicial construction of the three vital paragraphs of the will. These petitions were entertained over objections of counsel for the executor and for the Paul Smiths College.

The opinion by Acting Surrogate Lawrence, who took Jurisdiction in the proceeding because County Judge and Surrogate C. J. Carty Jr., had appeared in the proceedings as counsel for a petitioner before he took office as surrogate, offers numerous authorities for the decisions on the contested points.

The judicial construction of the will views as valid its paragraph which provides for annuities of $2,000 each to Anna and Kitty Dullea; $1,000 to Florence Jones, and $600 to Harriet Duane of Malone. Upon the death of each of these beneficiaries a proportionate share will be paid the college as residuary legatee.