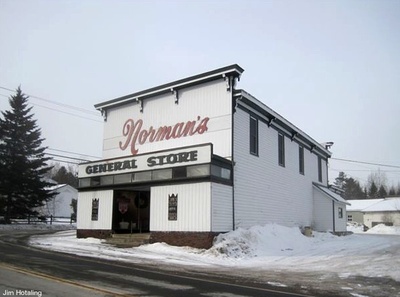 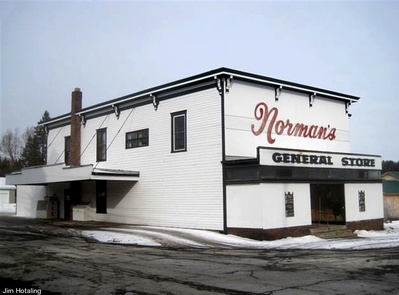 The Bloomingdale Saddle Club has done a nice job of decorating Norman's Store window. Stop and look it over.

The kindergarten morning class went shopping at Norman's Store on Friday, purchasing some of the things they will need to prepare their Thanksgiving dinner on Tuesday.

By Martha Tyler and Floyd John

For over 95 years, everyone who travels on Route 3 from Saranac Lake toward Plattsburgh passes Norman's General Store in Bloomingdale. The store was built by Mathias B. (Matt) Norman and a first cousin, Benjamin Franklin Norman, in 1904. Around 1909 Matt bought B.F.'s share and the business has been operated by members of Matt's family since then. Matt and his wife, Eleanor O'Malley, had one daughter, Mildred, who married John Curran. They continued to operate the store after Matt passed away. One of their daughters, Norma married a Saranac Lake resident, Art Niederbuhl, who was a Navy veteran of WWII and a graduate of the MBA program at Dartmouth College. Now Art and Norma's son, Art, is continuing the family business. In the beginning, Norman's Store concentrated on the wholesale grocery business. They sold to the hundreds of privately owned businesses and camps within a 50-mile radius of Bloomingdale. As small stores and businesses in the area were sold to, or overwhelmed by, chain stores and franchises, the wholesale business decreased. Norman's Store also sells to many retail customers who shop in Bloomingdale.