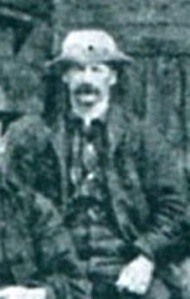 Philemon King was a guide and a farmer who supplied Paul Smith's Hotel in its early years. Phil King was one of the guides photographed by A. W. Durkee at Paul Smith's boathouse on October 2, 1885. His farm was located on the west of what is now New York Route 86 at the top of Easy Street hill. There was a large hall on the farm which was used for dances and as a polling place.

He is buried in Mountain View Cemetery in Brighton.

Philemon King, the pioneer farmer of the town of Brighton, known every-where as "Phil," and who has been identified so much in many ways with Paul Smith ever since Paul came to St. Regis Lake, went to Brighton nine years before Paul.

Phil King was born October 3, 1837. He went to Brighton (then a part of Duane) in 1849, when not twelve years old. In a few years he bought a farm, adjoining the one where he now lives and where his son Eli King now lives, and was married to Jane Quarters in 1857. He says that he and his wife did lots of farming together barefooted, and that after Paul got located where he is now he would watch for Paul to get a barrel of flour and hurry down and borrow a pailful.

A good story is told in regard to the milk trade between Phil and Paul, but will not vouch for the truth of it. As the story goes, Paul declared that Phil was watering his milk, and refused to take any more, whereupon Phil had Paul sued at Malone. Paul had four witnesses, who were guides and near neighbors of both parties. When in the court house at Malone. Phil looked at the witnesses and asked Paul if those were his witnesses. Paul said they were. Then says Phil. "I'll withdraw the suit and pay all costs, as I have used those same witnesses myself."

By all of Paul's old city guests and many of his late ones, Phil is well and favorably known. By hard labor by himself and wife they have accumulated a nice property. He is now about sixty-two years old and appears as young as many of only fifty years.

A correspondent writes from Paul Smith's to the Potsdam Courier: "Active measures are being, taken toward building a Methodist church in the center of the town of Brighton. Mrs. A. A. SMITH is prime mover. PHILEMON KING has given the site and PAUL SMITH, several of his guests, and others, have contributed generously, until the amount is already $1,000. Work on the church is to be commenced when the sporting season is past."

To all who knew Philemon King, of Brighton, the news of his death on Tuesday of last week, as the result of the shock of paralysis which he experienced a couple of days previous to his death, brought a deep sense of personal loss, for he was a manly citizen and a most generous, loyal and sociable friend. For many years he had been prominent in the affairs of the southern end of the county, taking an active interest in county politics, and in former years engaging in many a sharp contest for the delegation of his town to Republican county conventions. He was often personally a member of the delegation and no political task was too arduous for him to undertake for a friend. He was a prominent and successful farmer and did a large business for years in supplying products of the dairy and the soil to Paul Smiths hotel and the many expensive camps in the Upper St. Regis territory. In every enterprise for the welfare of his own community he was deeply and actively interested and during his life held numerous town offices of trust and responsibility. His disposition was frank and open and those who happened to be opposed to him in a political movement found him always a square and worthy fighter. Many there be throughout the county who join with his family and townsmen in mourning his loss, for "Phil" as he was best known, possessed "the milk of human kindness" and was a capable and upright man who will be deeply missed. He was an honored member of Franklin Commandery, under whose auspices the funeral was held on Thursday. A large delegation went from Malone to attend the obsequies. Mr. King was about 70 years of age, was born in Canada and settled in Brighton over half a century ago. He was a 32nd degree Mason. His surviving children are Elliott, Ambrose, Julius, Mrs. K. McDermid and Mrs. Margaret Whitman.

Some time ago The Farmer referred to the fact that the original Phil. King farm of 125 acres near Gabriels had been sold to Mrs. Carrie M. Smith, of Saranac Lake, formerly of St. Regis Falls, who will spend $2,000 in repairs and improvements, will have cottages for tourists, and a store for tourists' supplies and curios. She has named the place Pine Haven. The King farm was originally 50 acres and was cleared by Phil King, who added to it and made it a productive property. In 1869 Mr. King purchased the Paul Smith farm of 205 acres where he spent the remainder of his life. J. Q. King, son of Phil King, later came to own his father's original farm property. The house was remodeled and modernized by J. Q. King in 1913 and is a handsome property. Part of the 18-foot kitchen is the original home which Phil King built in the wilderness.