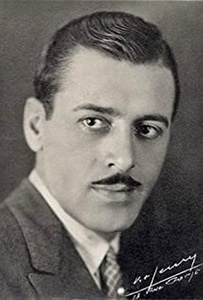 Valentín Parera was a Spanish actor who appeared in both silent and sound films in the 1920s and 1930s. He was married to the American singer and actress Grace Moore from 1931 until her death in a 1947 plane crash.  In 1941 Mr. Parera was a patient for eight months at the Santanoni apartments; and he suffered a relapse the winter of 1943-44.

The Place: To be announced

The Program: A regular "Grace Moore Concert," but with one-half of the time given over to "requests," which will be submitted by patients and residents of Saranac Lake.

Seat Sale: Reservations may be made now at the offices of the Guild. Mail orders will be accepted.

Hidden in the above "statistics," which apply to the concert Miss Moore will give for the benefit of the Saranac Lake Study and Craft Guild, is the affection that Valentin Parera, a patient, and his wife, Miss Moore, have for Saranac Lake.

That affection was evident through every stage of the necessary planning for the concert. It influenced the choice of a date.

"This concert is for the patients, and residents of the Adirondacks," Mr. Parera told Dr. Francis B. Trudeau, Guild president, who is his physician. "The Summer visitors are able to go to the opera in the city."

The same kindly consideration entered into making up the program. Mr. Parera with the consent of Miss Moore, offered to allow patients to submit their preferences, in writing, to The Guild News.

The requests will be tabulated, and turned over to Mr. Parera. One-half of the program will be devoted to them. That is not the procedure when Grace Moore gives concerts in the largest cities in the country. Here, however, Mrs. Parera is singing for her husband's friends and fellow-patients, in the village where he is regaining his health.

The scale of prices, by mutual consent of Mr. and Mrs. Parera and Guild officers, has been arranged so that the concert, which is one of the outstanding events of the year, will be within the means of every music lover. The first three rows have been set aside, so that persons able to do so may show their gratitude to Mr. and Mrs. Parera by making a contribution to the Guild. Miss Moore has offered to autograph these tickets.

All this should serve to give Saranac Lake a revealing picture of two new-found friends, Mr. and Mrs. Parera. Miss Moore, due to her outstanding success in opera, stage, moving pictures and radio, came here as an "old friend." Mr. Parera, equally distinguished in his field, has required only a short time to obtain the same status.

He was a successful banker in his native Spain, when he decided that his field was the arts, and turned to motion pictures. His first Spanish picture was produced in Paris, and was a hit. Then he went home, only to find that success could not entirely lower the raised eyebrows of his family and friends, who doubted the sanity of anybody foolish enough to desert the "safety" of banking for anything as "questionable" as moving pictures.

He made Spanish pictures in London, Paris and Berlin. He was star, writer, and producer, at one time or another. His one Spanish venture was not a happy one. Crude lighting injured his eyes.

Soon Hollywood called. Financially, the move was a success. The Hollywood moguls were delighted. Mr. Parera was not.

That was before Hollywood, cut off from European markets, began to woo the Spanish speaking markets in Central and South America. Then almost anything was deemed good enough for the Latin-American trade.

As a star, Mr. Parera was asked to pronounce Spanish words to suit the whims of a director, who spoke no Spanish, and who, it was apparent, was none too facile in English.

As a director, he was asked to cast an actor, who spoke in the accents of Castile, in Mexican pictures.

"Asked" is the correct word. It never went beyond that stage. Mr. Parera could afford to refuse, and he did. He tore up contracts with some of the largest studios, but he had his way.

Then he tired of the constant struggle, and left Hollywood. Since then he has been his wife's manager.

That is Valentin Parera, who bought, and paid for, the first five-dollar ticket to the concert, which was made possible by the generosity of Mr. and Mrs. Parera. Dr. Trudeau was the second purchaser.

The price range makes it possible for every music lover to be present on May 10th. Miss Moore wants to sing the songs you love best. Please send your requests to The Guild News as soon as possible. #

Fresh from triumphs in Mexico City, where she received the highest civil decoration of the government, Grace Moore, lovely star of opera, stage, radio and moving pictures, will appear at the Pontiac theatre, Saranac Lake, on Saturday night, May 10, at 8:00 o'clock, in a concert for the benefit of the Saranac Lake Study and Craft guild.

The concert which, it is felt will be one of the outstanding musical events in the Adirondacks in recent years, is being offered by Miss Moore as a token of the affection which she and her husband, Valentin Parera, feel toward the north country.

Mr. Parera has recovered during recent months from a serious illness for which he was treated in Saranac Lake. The guild, which will benefit by the performance, conducts educational and recreational activities for health seekers and townspeople.

Miss Moore, leading soprano of the Metropolitan Opera association, will offer a complete program of operatic and popular selections. Her encores will include many requests. She will be accompanied at the piano by Isaac Van Grove, former conductor of the Chicago Opera company, who will also give a group of piano solos.

Reservations for the concert may be made by mail or telephone at the guild headquarters, 100 Main street, Saranac Lake.

Grace Moore, nationally known singer of stage, screen and radio and her husband, Valentin Parera, arrived in Saranac Lake last week. During her husband's earlier stay in this village, Miss Moore gave a benefit concert for the Saranac Lake Study and Craft guild at which more than $1,000 was cleared. The proceeds of the concert enabled the guild to purchase its home at 100 Main St.

Miss Moore has returned to New York with her husband after the latter's examination.

Saranac Lake.—Grace Moore, nationally known singer of stage, screen and radio, arrived at Saranac Lake Thursday with her husband, Valentin Parera, who is returning to the resort where he was a patient for eight months three years ago and who suffered a slight relapse during the past winter. During her husband's stay at Saranac Lake, Miss Moore gave benefit concerts there and took an active part in community life. One of her concerts netted upwards of $1,000 for the Saranac Lake Study and Craft Guild.

…The new building, former home of the late publisher, Kenneth E. Goldthwaite at 100 Main St., was acquired four years ago for $8,000. It was dedicated by Grace Moore, opera singer, who gave a benefit concert here which netted sufficient funds to redecorate the building.

Miss Moore was at Saranac Lake to visit her husband, Valentin Parera, then convalescing at the Santononi apartments in Church street…