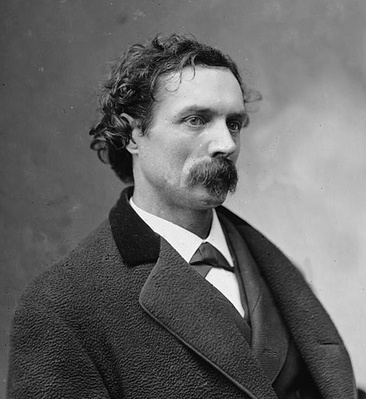 Whitelaw Reid was a politician and newspaper editor, and the author of a popular history of Ohio in the Civil War. He was for many years the editor of the New York Tribune and a close friend of Horace Greeley. He served as the United States Ambassador to France from 1889 to 1892, and again as Ambassador to the United Kingdom from 1905 to 1912. In 1892, he was the Republican Vice-presidential nominee, replacing Levi P. Morton on a ticket headed by incumbent President Benjamin Harrison, finishing second among the three competing parties.

The Reid family has one of the oldest camps, Camp Wild Air, on Upper St. Regis Lake. The Reids and Trudeaus were family friends; both leased their original camps on the St. Regis lakes on the same day, July 15, 1886. 1 In World War I, Mrs. Reid headed the London chapter of the American Red Cross, and — no doubt drawing on her Adirondack experiences — sent American nurses down-filled sleeping bags.

Whitelaw Reid, editor and principal owner of The New York Tribune, who died Dec. 15, 1912, at his post as United States Ambassador to the Court of St. James's, London, left a gross estate valued at $1,398,884.04. This figure was reported by Transfer Tax Appraiser Edward V. Brophy to Surrogate William A. Sawyer of Westchester County yesterday. No deductions were made from the taxable total of the estate. Mrs. Elizabeth Mills Reid, widow of Mr. Reid, who was the residuary legatee and executrix of the will, requested her lawer, Col. Henry W. Sackett, not to permit the customary deductions from the estate for funeral expenses, debts, and administration expenses, since she preferred to bear them herself. Her interest in the estate was $1,289,685.94.

Estate Had Been Overestimated.

The amount of Mr. Reid's estate, Mr. Sackett said, had been greatly over-estimated because of the wealth of his wife, who was a daughter of Darius Ogden Mills. Besides Mrs. Reid the beneficiaries, as shown by the appraiser's table, were his niece, Mrs. Ella Spencer Reid Harrison of 1998 Vallejo Street, San Francisco, $50,000; his nephew, Robert Everit Smith of White River Junction, Vt, $5,000; Donald Nicholson of Pleasant Valley, N. Y., his right-hand man in the days when he was the active editor of The Tribune and since Vice President of the Tribune Association, $1,000; …