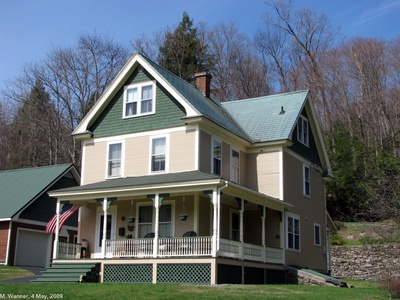 Other information: William Demerse, a lifelong resident of this region, was superintendent of the water bureau in 1930-31. No patients were taken, just the very large DeMerse families lived here between 1925 and 1969. 1

Leah, being the oldest, married sister, was responsible for finding a suitable husband for Mary. She took Mary into her home to teach her the "wifely duties" she would need to know, and how to manage a household.

When Mary met William, Leah disapproved strongly. William did not have wealth and she considered him to be beneath the DeLisles. But after much wrangling and pleading, Mary convinced her and Leah reluctantly gave in. After the marriage Mary and Will temporarily moved into the little house that used to be on the corner of Maryland Ave. and Kiwassa Road. Will intended to begin building his house at #63 right away but Leah said Mary was living in poverty and he had to do better right away. After all, a house isn't built in a year when it is three stories and as big as #63 is, but Leah would not relent.

So, Will put in the stone basement and foundation of the barn that sits on the hill behind #63 and he capped it over and that became their home while he built. Mary, of course, spent most of her days across the street in Leah's house and Leah made a lot of trouble for Will and Mary - almost ruining their marriage. Finally, #63 was built-at least the lower floors, and they moved in. My Dad was already born and the rest came along rapidly.

When Leah saw how lovely Mary's home was and how Will gave her everything she needed, Leah finally accepted the marriage as a fact . . .