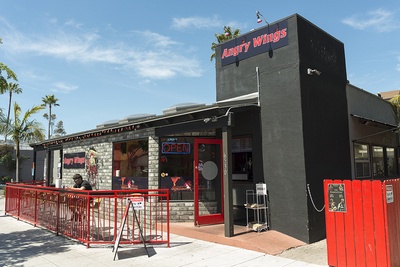 Angry Wings was a spicy wings restaurant. It opened in 2012, replacing Chino's Rock & Tacos, and it closed in December 2014. It was part of a bunch of businesses that opened in fall 2012 in IV.

A Daily Nexus review from 2012 said "I was particularly intrigued by the note on the menu that said that anyone who was visibly intoxicated and has a blood alcohol content of over 0.08 percent would not be served the Solar Flare wings. These must be hardcore."

It was replaced by a restaurant called OTaco, which was owned by the same people as Hana Kitchen. In April 2015 it was under construction and then began serving food and drinks. OTaco closed in December 2016.