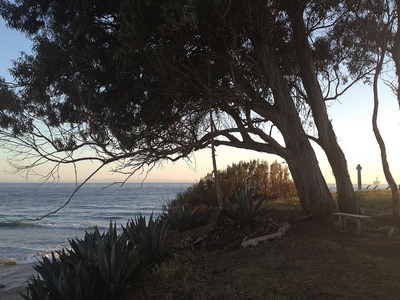 Coal Oil Point in May 2012, with the old Campbell cross in the background and Platform Holly in the far background. by Britta Gustafson (CC BY-SA).

Coal Oil Point or Devereux Point is the pointy bit of land just west of Isla Vista, accessible via Slough Road. It is part of the Coal Oil Point nature reserve, owned by the University of California Natural Reserve System. The reserve contains a seasonal tidal lagoon (Devereux Lagoon) with a walking trail. Outside of restricted sensitive habitat areas, the reserve is open to the public for recreational beach use, hiking, and birding. 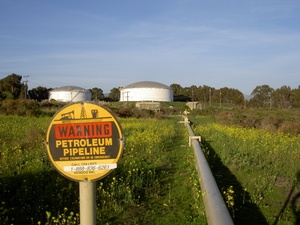 The ocean floor near here is a rich natural petroleum seep field, which gives Coal Oil Point its name. Platform Holly is an oil extraction platform visible offshore from Isla Vista and Coal Oil Point, and there are large oil storage tanks in the reserve between Coal Oil Point and IV (on space leased to an oil company by UCSB - Venoco's Ellwood Marine Terminal). Venoco has also placed "seep tents" on the ocean floor, pyramids that capture natural gas. Every ten days or so, a barge comes by to drain the oil from the tanks (via a pipe that connects to the barge offshore) and take it away for processing (here's more about that process), and there has been some discussion of building a pipeline instead of that barge system. Venoco sometimes gives boat tours out to Platform Holly - here are photos and an article about it. 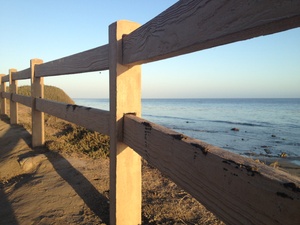 Tar scraped off shoes on the fence at Coal Oil Point. October 2012, by Britta Gustafson (CC BY-SA).Little blobs of tar wash up on the beach and stick to your feet as a result of the natural seeps. The Chumash people, living here for thousands of years before the Spanish began colonizing the coast in the 1700s, used the natural tar "for everything from building canoes to casting broken bones to making chewing gum" (which may have caused health problems). They also used it to seal water-tight baskets for carrying water.

There was an asphalt mine for a couple years in the late 1800s between the current UCSB Faculty Club and Art Department buildings; there are a few surprising pictures of very grimy-looking men hauling things around the campus lagoon.

See also the Ellwood Oil field nearby, and the old (and beautiful) Barnsdall-Rio Grande gas station in Ellwood. 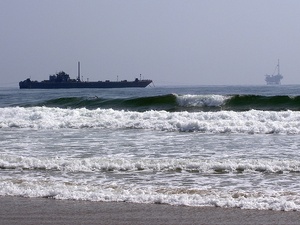 Oil barge as seen from Ellwood Mesa, with Platform Holly in the background. May 2007, by Britta Gustafson (CC BY-SA). 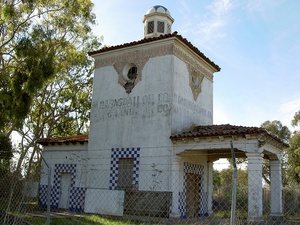 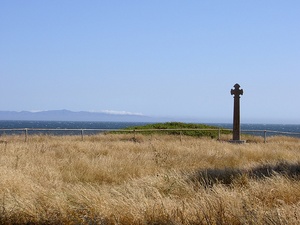 The cross at Coal Oil Point, with one of the Channel Islands in the background. May 2008, by Britta Gustafson (CC BY-SA).At the tip of Coal Oil Point, there is an Irish-style cross marking an unoccupied grave, along with brick gate posts and an earthquake-damaged dovecote. These date back to the Campbell Ranch days of the 1910s-1930s, along with the Old Campbell Barn and The Jailhouse. 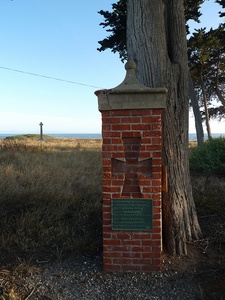 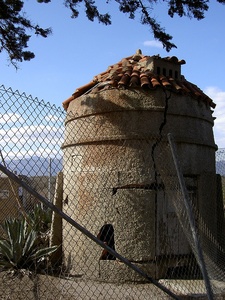 In 1947 that land was sold to the Devereux School; its main campus is now closed. UCSB purchased the land, and some of it is in use by UCSB and other organizations, but many of the school's old buildings are simply boarded up. The main school building, Devereux Hall, was the old Campbell Ranch house. There's a lot about this history in this Edhat article. 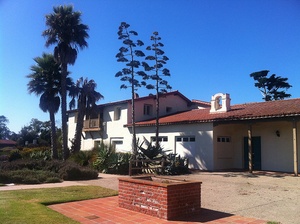 In the early 1940s, the government established Marine Corps Air Station Santa Barbara on the land that is now the Santa Barbara Airport and UCSB campus. They also had a radar station out here; the Cliff House at Coal Oil Point dates to that era, serving as an officers' club and mess hall (although UCSB plans to demolish it sooner rather than later). The Cliff House is currently used for events sometimes. 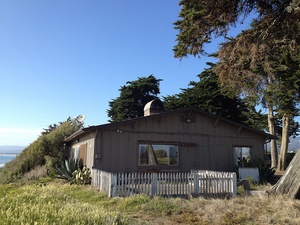 There is so much more to say about this history! Add more about these things here, or start the articles for them!

Sands Beach is the beach portion of the reserve just past the point, and is a popular surfing spot for locals.

If you head from Coal Oil Point toward Isla Vista, there is Devereux Beach, which includes The Jailhouse.