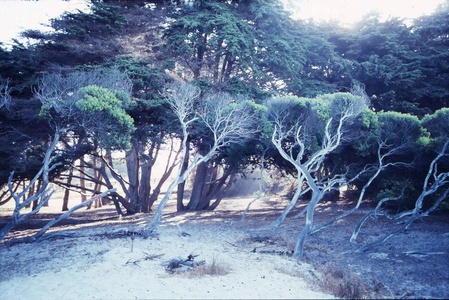 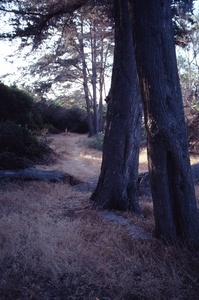 The Enchanted Forest was a grove of trees by Coal Oil Point, where IV residents used to walk out to wander around and enjoy nature. It is remembered by people who lived here in the 60s and 70s, a romantic nickname for a piece of nature that felt unspoiled at a time when "back to the earth" was an important element of the counterculture. In 1999, the trees were cut down and the area was fenced off as part of restoring the area to native habitat; the Enchanted Forest no longer exists, and not many people know of the name anymore.

Stories about the forest 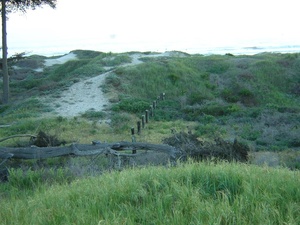 Peter Meissner says, "And the Enchanted Forest... there was an old weathered and deteriorating wooden stage there. I never found out why, or who built it. It was just always there from the time I arrived, and I assumed it was the U. but I never saw any organized activities centered around it, and since it was such a quiet place, I practiced tai chi there."

A 1972 "student guide to the United States and Canada" says "On the north side of Isla Vista is Devereaux, an area with a nudist beach...and an enchanted forest. The forest is natural and seems to have no wind and no sound." 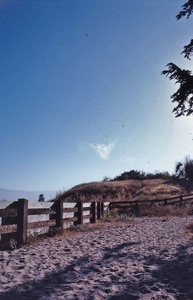 By Peter Meissner‎The 1971 book Streets, Actions, Alternatives, Raps: A Report on the Decline of the Counterculture, by John Stickney, includes: "Couples ambled hand in hand along the shore to a special trysting place down the way called the Enchanted Forest" (94) and "They had just dropped some acid, they told me, and were planning to walk down the beach to the Enchanted Forest for the changes that awaited them there, tripping. "Everybody loves days like this," Susan said and smiled, "loves the sunshine and relates to it. I am sure it influences our politics. If problems are in the way, it is so easy to step aside and pass them by. The sun takes care of them all, finally."" (106).

A 2000 self-published novel "Clean and Sober" says "He is approaching his destination now — it is the Enchanted Forest, as he and his friends had called it in the good old days back in 'Sixties and early 'Seventies — just beyond Coal Oil Point. It is a grove of tall cypress trees flanked by low-growing laurel, on the seaward side opening to low dunes and the roar of the surf. It is a place of remembered acid trips and romantic sunsets, of grandiose dreams and the sexual garden — and right away he notices that there have been changes since his last visit. The cypress trees have been suffering in the drought — the tall ragged trees are wilted under the prevailing wind, and the two largest are reduced to stiff dead trunks and branches...his dreaming mind fetches up the image of a night when there had been twenty people around a fire in the Enchanted Forest — naked and friendly in the firelight" (pages 133-134).

(Note that fires are illegal and dangerous in this area though. In 2014 there was a wildfire with an unclear cause, the Tank Fire, that burned part of Coal Oil Point. El Capitán State Beach up the coast has legal fire pits.)

What happened to it

A Santa Barbara News-Press article from September 2000 explains why the Enchanted Forest got cut down, and that this was controversial at the time:

"After 30 years of hands-off management, scientists who oversee the reserve are beginning, for the first time, an extensive restoration of the top sites for bird diversity on the coast. While the work at the 117-acre reserve west of Isla Vista overlooking the Pacific Ocean has attracted strong support from environmentalists, scientists and many locals, it is also drawing criticism from a group whose members include some who have been using the beach and dunes since the early 1960s."

"A six-acre stand of old acacia trees, dubbed the "enchanted forest" by locals, was cut down last year. A group of old Monterey cypress trees was left behind, but the tangled wood behind the rolling sand dunes where homeless people once camped and children sometimes played was replaced with ground-hugging native beach primrose, seaside daisies and coastal poppies. The area is now fenced off for protection of the plants, which include a patch of endangered milch vetch. There are only 70 such plants in the wild, and the dunes now have 15 of them, Sandoval said."

The article explains that a number of organizations supported the effort and that some locals did not: ""I'm offended by the high-handed manner in which the changes were foisted onto the community and the arrogance that has been expressed by the caretakers," said Roger Lagerquist, a member of the Isla Vista Association home owners group and a former manager of the Isla Vista Parks and Recreation District. "They applied 'radical' environmental tactics like chopping down trees.""

A couple of older Coal Oil Point Reserve documents mention the Enchanted Forest as an area, one about a planting project in 2000 and one from 2001 about a snowy plover management plan. 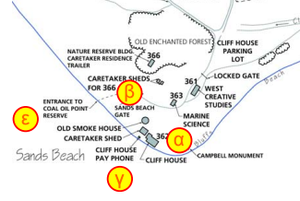 From the UCSB and IV Walking Tour, page 4.