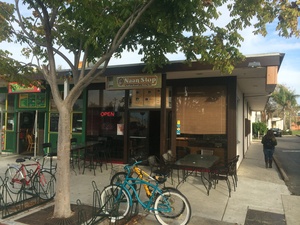 Naan Stop was started by the same people who ran Spice Avenue in downtown Santa Barbara, and who later opened India Club in Goleta. Their location used to be home to Boba Tea House, and when they moved in they continued to sell boba drinks.

In 2010 this building did facade improvements as part of the county's facade redevelopment program for IV. You can see the older facade in these photos at SantaBarbara.com.

This location as Tapioca Express in 2003: 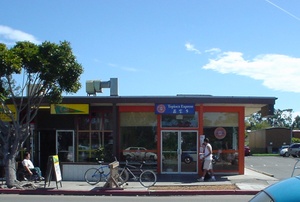 One review says "Naan Stop may be my favorite lunch spot in Isla Vista. The food is not the usual ginormo burritos for drunk people, it’s tasty, they serve it up quickly from a buffet style counter, and the price is right." More from this reviewer in 2009, pointing out a dosa menu.