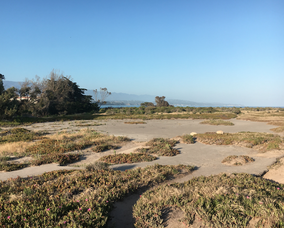 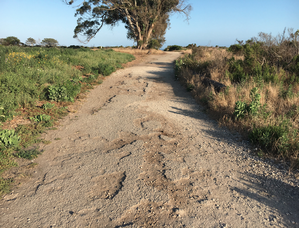 The main walking path of Campus Point, located at the southern tip of UC Santa Barbara’s campus, is an old paved road that leads to a flat blacktop area and a roundabout. Though a popular destination for students and visitors, there is no indication that the road or other paved areas are maintained by the University, as is shown by the many cracks and potholes throughout them. Contrasted with the plants, trees, and dirt, the paved areas do not appear to match their natural surroundings (which are under restoration by the Cheadle Center for Biodiversity and Ecological Restoration1). There is not a clear reason why these paved areas came to be, though many students and community members have varying speculations. Today, this region is an important part of the campus and receives regular visits from students and locals.

Based on aerial footage stored in UCSB’s Map & Imagery Laboratory, the roads appear to have been constructed sometime around 1943. An aerial photo from 1941 shows no activity in the area, but in an aerial image from 1943 construction is well underway:3,4 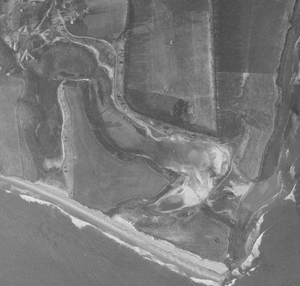 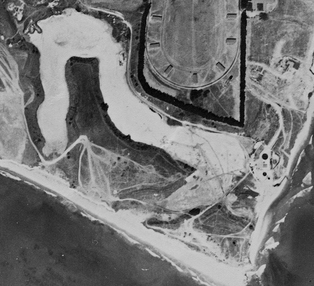 Construction of the area continued into 1944, as another aerial image shows.5 An aerial image from 1947 shows that the area was completed and looks similar in structure to its current day status.7 Therefore, it is likely that the paved areas were finished in 1945. 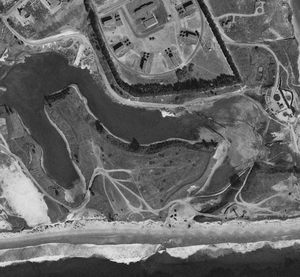 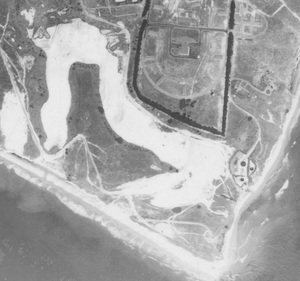 Based on this timeline, it is evident that the road and related areas were put in place by the U.S. Military during World War II, when this landscape was known as Marine Corps Air Station, Santa Barbara (MCAS SB).

The function of the paved regions of Campus Point is unclear, despite the knowledge of the time period in which they were created.

Information taken from a proposed lagoon restoration plan in 1968, indicates that the old road follows a water pipeline put in place prior to University ownership.7 It is possible that this road was made to construct this pipeline intended for irrigation or other functions for servicemen.

A map from UCSB’s Special Collections, designed to show the intended use of old military structures for UCSB’s Goleta Campus, indicates that the paved road leading from the West to Campus Point, was called “Skeet Range Road”.8 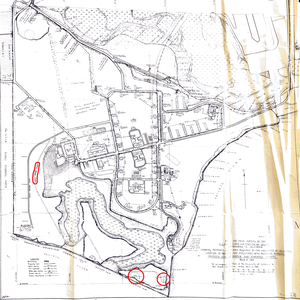 Map of the Mesa Portion of the U.S. MCAS at Goleta.8 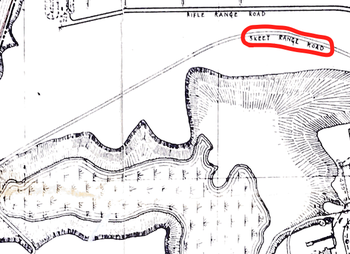 Close-up of map at left, with Skeet Range Road highlighted.8 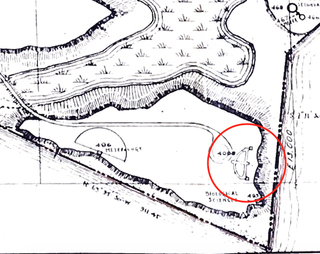 Close-up of map at far left, with skeet range circled.8

The semicircular formation cut into the plant life to the right of the roundabout fit the shape of a skeet range. A phone interview with Senior Campus Planner Dennis Whelan confirmed that Campus Point was popularly used as a skeet shooting range.9 Even today, remnants of clay pigeons used for shooting can be found on the bluffs near Campus Point. 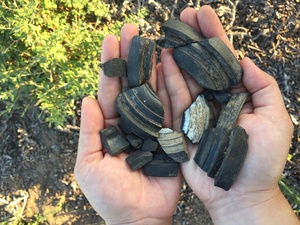 In an aerial image from 1944, there is a tall metal structure placed on the blacktop area towards the right. Because it was built during the period in which this area was operated by the U.S. Marines, this tower must have been designed to serve the base in some capacity. Whelan says that it may have been a watch tower, water tower, or form of artillery, though he is not certain and no other sources have confirmed this.9 Images from 1947 show that this structure no longer remained, supporting the theory that it served a function specific to the military.6 In the same image from 1944, cars are parked in the left blacktop area, thus indicating multiple uses for the region.5

Aerial images from 1956 show vehicles parked in the open space close to the roundabout and a different structure, taller and wider than the previous, erected here as well.10,11 When examining two of these aerial photos using a stereoscope, the structure appears to be much taller than surrounding objects, but it is still unidentifiable. A different image found online offers a direct view of this structure. While it is unclear exactly what the structure is from these photos, this building offers support to theories of a potential oil derrick, water tower, or lookout tower. 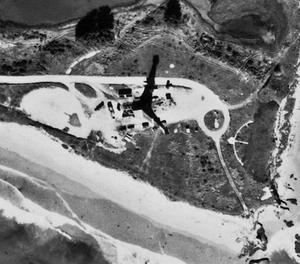 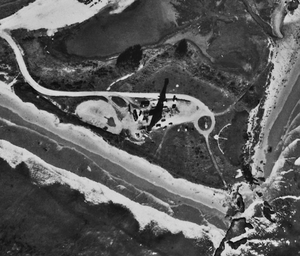 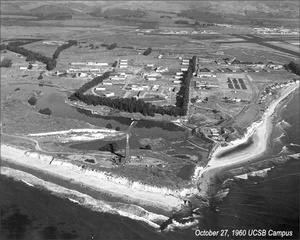 The previously mentioned map also shows that the old paved area of Campus Point, previously used as a skeet range or parking lot for vehicles, was intended to be used for meteorology in some capacity as the University took over this land. There was no information readily available to confirm whether the University made any attempts to utilize this space as indicated for meteorological studies. 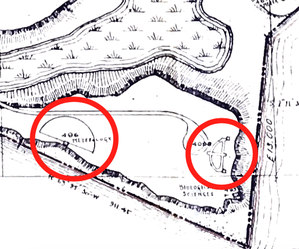 Close-up of "Map of the Mesa Portion of the U.S. MCAS at Goleta" with proposed meteorology portion for the new campus.8

Many students and community members have differing thoughts on what the paved area was for, though most seem to agree that it is an artifact from when our landscape served as a military base. One common and widespread myth is that the open blacktop area once served as a helicopter landing pad during World War II. Senior Campus Planner Dennis Whelan reports that this is not the case, as the current Santa Barbara Municipal Airport was also part of the Marine Corps Air Station, and this was the designated space for aircrafts to land and take-off.9

Currently, the open space and road on the bluffs of Campus Point do not appear to be maintained by the university, as much of the asphalt is cracked and some areas are missing layers of asphalt altogether. The lagoon and all of the surrounding area are considered an Environmentally Sensitive Habitat Area (ESHA) according to Senior Campus Planner Dennis Whelan.9 The Cheadle Center for Biodiversity and Ecological Restoration is working to restore this habitat, by planting and watering native species in the area. As to not disturb this sensitive environment, the university does not actively maintain these roads.

Whelan says that another important reason why the paved road and space remains is because it provides accessibility for emergency personnel and vehicles. In the event of a fire or someone needing medical attention, it is important that there is a way for emergency vehicles to drive up to the bluffs.9

Throughout different times of day, students and community members can be seen running, walking pets, or hanging out in the area. Some students use the flat open area to practice skateboarding tricks, while others have been seen meditating and sunbathing.