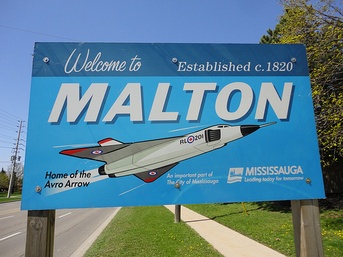 Malton is unique in that it is not beside any other neighbourhood in Mississauga .

Malton is surrounded by Highway 427 and Finch Avenue (border with Toronto) to the east, the Brampton city border along Steeles Avenue to the north, Airport Road to the west, and the CN rail line to the south.

The oldest portion of Malton (the former Police Village of Malton) is located on the northwestern corner of Airport and Derry Roads.

An interesting thing about many of the roads in Malton is that they are named after cities in England. The Avro Arrow was built in Malton back in the 1950's

A Brief History of Malton

Toronto Township was expanded with the second purchase from the Mississauga Natives October 28, 1818 to include the land that became Malton. Around 1820 Richard Halliday, the local blacksmith and innkeeper, arrived and named the settlement Malton, after his home in England. In the 1840s, the Blanchard family cleared land northwest of the Four Corners (intersection of modern-day Airport and Derry Roads) and the area became the Village of Malton.

Malton had about 350 people in 1850. Malton was a farm community and the introduction of the Grand Trunk Railway in 1854 (same railway route of the modern-day GO Trains), allowed better access to Toronto markets for the local farmers. The village of Malton was subdivided in 1855 with streets named after the English Villages the residents came from.

In 1937, Malton experienced a major shift from agricultural to an industrial economy when 13 farms were selected to become the location of an airport, now known as the Pearson International Airport.

National Steel Car built a factory to make airplanes under license on the northeast corner of the land that was acquired (13 farms). National Steel Car was appropriated during the War and became Victory Aircraft, building Lancaster Bombers. After World War II, Victory Aircraft was acquired by A.V. Roe or AVRO. AVRO made the CF-100 and the famous AVRO Arrow that was controversially scrapped. The AVRO facilities were later used by DeHavilland, Douglas Aircraft, McDonnell-Douglas and finally Boeing. The facility was demolished in 2005. 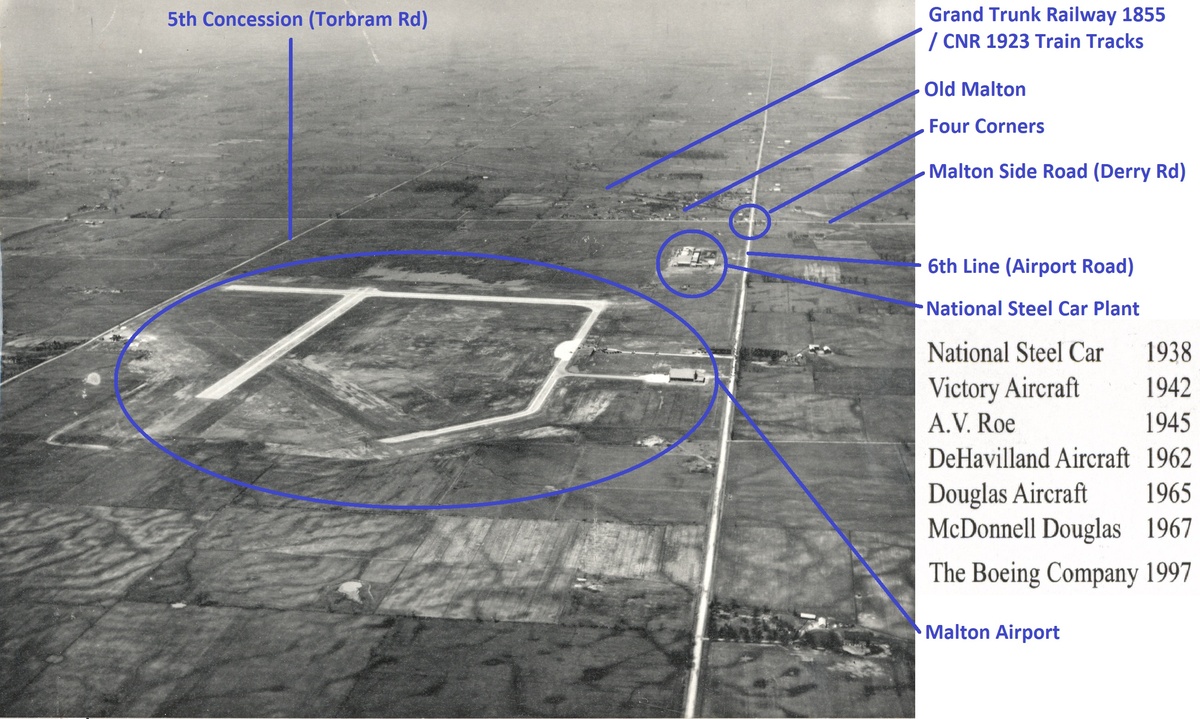 In the early 1940’s, Victory Village (Victory Crescent, McNaughton, Churchill, Lancaster) was built to house the people working at Victory Aircraft. In the 50’s Ridgewood and Marvin Heights subdivisions were built. In the 60’s, the Westwood subdivision was started.

On October 25, 1969 a gas line rupture caused an explosion at the "Four Corners". 75-year-old Jean Perigo was killed instantly, and 20 other people were injured. Two houses, 17 businesses and 49 cars were destroyed.

Unable to include Malton on the Web