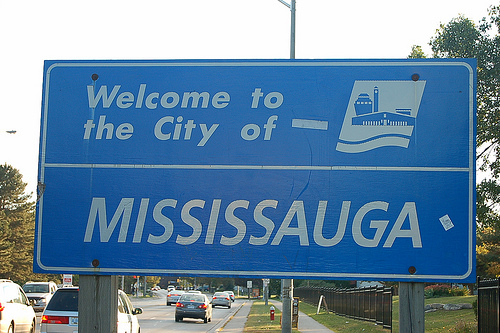 The population of Mississauga is appproximately 700,000, making Mississauga the 6th largest city in Canada. Location Mississauga is one of the many cities and towns in the “Golden Horseshoe” which is Canada's manufacturing heartland. Located on the western boundary of the City of Toronto, it forms part of the Greater Toronto Area. Buffalo, New York, is the closest major U.S. city to Mississauga

Form of Government is a two tier structure of local government with Mayor & Council who are elected for a four year term. City of Mississauga along with the City of Brampton & Town of Caledon are within the Regional Municipality of Peel.

Born out of the amalgamation of 10 small communities in 1974.

There are seven major highways link to the city

There are several Cemetaries in Mississauga.

Two major river valleys that run through Mississauga and feed into the lake Ontario.

The Credit River is by far the longest with the heaviest flow, it divides the western side of Mississauga from the central/eastern portions and enters the lake at the Port Credit harbour. This indented, mostly forested valley was inhabited by native peoples long before European exploration of the area. The valley is protected and maintained by the Credit Valley Conservation Authority (CVCA).

Etobicoke Creek forms part of the eastern border of Misssissauga with the city of Toronto. North of there is passes through Pearson Airport, where there have been two infamous aviation accidents where aircraft slid into its banks. This valley experienced some heavy flooding with some homes along its edge being swept into the lake as a result of heavy rains from Hurricane Hazel. This creek and its tributaries are administered by the Toronto and Region Conservation Authority (TRCA).

If you are new to Mississauga or Canada for that matter and need to learn or better your english you can get Free English Classess that are funded by Citizenship and Immigration Canada.

There are a number of Hotels in the city, many by Pearson International Airport

Major Employers in the city include quite a few head offices of major companies.

Below is a list of Community Services & Infrastructure in Mississauga