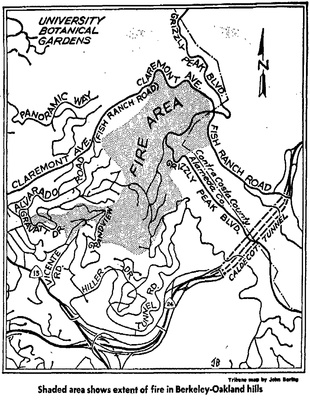 The 1970 Hills Fire burned 400 acres and destroyed 37 homes in the Oakland and Berkeley hills on September 22, 1970. Another 18 homes were damaged. 1 15 people, including 13 firefighters, suffered minor injuries. 5

After the fire, some people said the fire department was slow to respond, there was inadequate water pressure, and blamed the eucalyptus trees for the rapid spread of the fire. Fire officials blamed some residents for failing to clear dead brush around their homes. 2 And as proved to be a problem again in the 1991 Firestorm, some outside fire agencies were unable to connect to the 3" hydrant connections (many other jurisdictions use 2.5")

About 10AM, the fire started near Grizzly Peak Blvd. and Fish Ranch Road. As noted above, there was disagreement about the time the fire started, with some residents saying they called before 10AM, but another person saying it hadn't started as of 10:10AM. It was a hot, dry, windy day; the wind blew flaming debris and made containment of the fire more difficult.

Numerous volunteers helped firefighters drag hoses and shovel fire lines, including no small number of "hippies". 4 One of the homes threatened was that of future mayor Lionel Wilson. 6