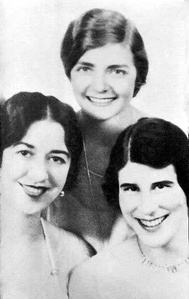 The Arion Trio was a musical ensemble started in the 1920s by three women from Oakland Technical High School, Josephine Holub (1919, violin), Joyce Holloway (Barthelson) (1918, piano), and Margaret Avery (Rowell) (1919, cello). Wilhelmina Wolthius (1918) (who later changed her name to Antonia Brico) joined the group later. They were first heard on radio in 1924 on KLX Radio in Oakland where they quickly became a regular feature. Beginning in 1929, Wolthius replaced Avery, and the ensemble was heard up and down coast 6 days a week on Pacific Coast radio networks. 1,2

The first mention of them in the Oakland Tribune was February 9th, 1920. They were to play for the Oakland Advertising Club, which met at the Hotel Oakland. 3 Later that year they played at an Ebell Society event. 4

Margaret Avery Rowell later taught cello at UC Berkeley, Mills College, and Stanford, and developed a 'whole body' technique of playing the cello that is still used, called the Rowell Method. She was the mother of acclaimed nature photographer Galen Rowell. 1,2