Henry was born in Millersburg, Ohio. His father, Samuel S. Henry, was a State Representative in Ohio. Henry came to California in 1851. He arrived in San Francisco then moved to El Dorado County and in 1858 moved to Placerville. At some point silver was discovered in Washoe, and Henry built the road known as the "River Road" between El Dorado and Placerville and over the Sierras to the Washoe mines. He was one of the founders of the Placerville and Sacramento Valley Railroad. 2

In 1863, Henry served as a state senator from El Dorado County.

[ Unclear what the connection to Henry House - Portland Hotel is. Can believe he had it built, though. ] 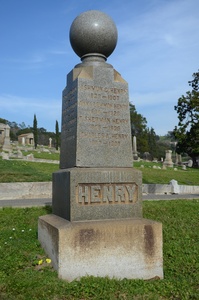 CC SA-BY Our OaklandAshmun Cook Henry died January 15, 1907, and is buried in Mountain View Cemetery in plot 12 along with Anna Maria and various family members.