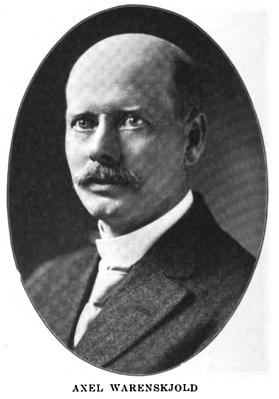 Axel Warenskjold (August 20, 1867 – October 22, 1951) was an engineer and one of the founders of the Atlas Gas Engine Company. He was also the grandfather of noted opera singer Dorothy Warenskjold. 2

Warenskjold was born August 20, 1867, in Haugesund, Norway to Hans and Ingrid Henrietta Warenskjold. He finished his education at a commercial and technical college in Trondheim, then came to the U.S. in 1883. He made his way to Chicago, where he received training as a machinist, then got a job at the California Wire Works in San Francisco. After a brief time in San Diego and Mexico c.1887, he returned to the Bay Area where he worked for the Hercules Gas Engine Works. 1

On April 9, 1889, he married Helen Francis Milton (Warenskjold ) (August 1867 - January 16, 1925), and they had four children: Hans Frederick "Fred" Warenskjold, William Earl Warenskjold, Olive Helen Warenskjold (Schindler)(Close), and Theos Warenskjold. Fred and William worked for Atlas; the 1910 census lists Fred as a mechanical engineer, and the 1920 as a draftsman. Similarly, William's WWI draft card and the 1920 census list him as a pattern maker for Atlas. Olive married twice and had two daughters. Not much is known about Theos, as he doesn't appear in census data, but is only mentioned as a "late son" in both Axel and Helen's obituaries. 3,4

William married Mildred Lorayne Stombs (Warenskjold) in 1919, and they had one daughter, Dorothy Warenskjold. Dorothy later attended Mills College. By the 1930, census William had shifted to real estate, but Fred and Axel are still listed as being in the diesel engine business.