Ferris served as Justice of the Peace from 1853 to about 1860. 1 He was a member of the Union or Republican party and went to the state convention in 1867. 2

One source credits Ferris with establishing the first private bank in Oakland (his family was in banking around the country) in 1867: First National Gold Bank. 3 However more contemporary sources state that the bank was actually founded in 1875. 5 He was also the president of the Alameda Savings Union bank, listed by the San Francisco Chronicle as the third local bank at the time. 6FK Shattuck worked for him at one point. 4

B.F. Ferris was known as the only former mayor of Oakland to commit suicide. On May 20, 1876, Webber first poisoned himself, tied his feet together and then jumped overboard while traveling under the pseudonym 'H. A. Johnson' as a passenger on the steamer Amador near Sacramento, California. The suicide occurred one year after the founding of his bank. According to a news article around the time of his death, he withdrew from the bank in January, and in the last two or three months spent a lot of time around the stock market. Family members found a suicide note to the effect that he had played the market poorly and couldn't bear to live anymore. His dramatic and anonymous death was reported in the Sacramento Bee and the article was reprinted in the San Francisco Chronicle. 7 Ferris may have had what we would now call a gambling addiction: in 1871 The Chronicle reported that he would be spending $5000 on the outcomes of that years' elections. 8

He is buried in an unmarked grave in Lot 1, Plot 258 of Mountain View Cemetery. 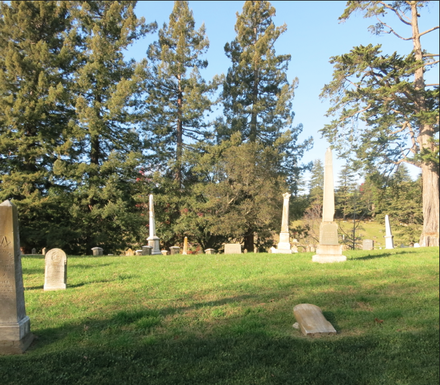