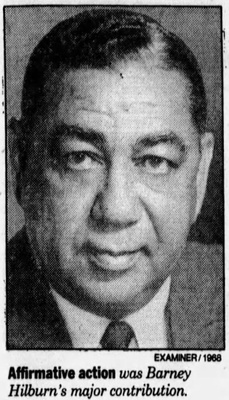 Barney E. Hilburn (c.1909 – 1990) was the first black man to elected to city-wide office in Oakland. He was elected to the Board of Education from School District 3 on April 21st, 1959.1 He was considered influential in the hiring of Marcus Foster, Oakland Unified School District's first black superintendent. Hilburn passed away in 1990 at age 81.2