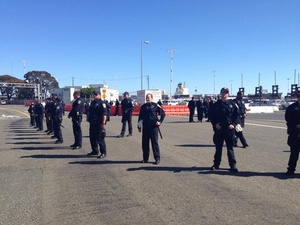 "“@juliacarriew: Police ready to take down #hamas #isis crowd on #oakland. They do have zip ties #BlockTheBoat" [@schtev69] 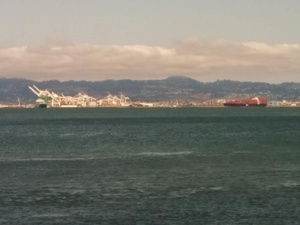 "I'm in SF watching the Zim ship in suspense wondering if it will turn. #BlockTheBoat" [@guelo]

Block the Boat is an Oakland protest of the occupation of Gaza that started on Sat. 2014-08-16 and continues on to 2014-08-19. Activists are trying to block an Israeli container ship from unloading in the Port of Oakland. They have successfully blocked it thus far and are trying again today (08/19).

It's possible that the ship might not unload at the Port of Oakland at all and might go to another port [SF Chronicle]. 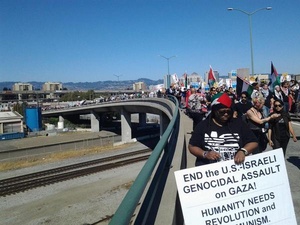 "This should give a better sense of the size of Oakland #blocktheboat action" [@marg1nal]Activists have set up a text message alert system:

"Block the Boat for Gaza has set up a text alert system. If you are planning on going to the action in Oakland on Saturday 08/16, please text the word ‘Join’ to 510-346-5951 for important updates. Please share this status far and wide." [source]

Longshoremen and the protest

According to the SF Chronicle:

"Longshore workers responsible for unloading the vessel have refused to do so, not because they are taking sides in the political dispute, but because they refuse to work "under armed police escort - not with our experience with the police in this community," said Melvin MacKay, president of the International Longshore & Warehouse Union Local 10.

Only when officers "dispersed" at 9 p.m. Monday did longshore workers agree to enter the facility, said union spokeswoman Jennifer Sargent. Those who declined to work on the ship were released, she said. Sargent said the peaceful demonstrators were outnumbered 5-to-1 by Oakland police and Alameda County sheriff's deputies.

Union officials said longshore workers have been concerned about port safety during demonstrations since several people protesting the Iraq war were injured in a 2003 port rally. Oakland police fired nonlethal projectiles, including wood bullets and bean bags, without provocation and without allowing protesters a chance to disperse."

Andy David, Israel's consul general to the Pacific Northwest, said about the protest: They chose a symbol, perhaps, and they're trying to portray it as hurting the Israeli government, but they're really causing damage to the people who live here, and to me this is exactly the definition of political terrorism." [SF Chronicle]

A Block the Boat protest was planned for 8/2/2014, but it was cancelled. Here's a news story about the planned event.

A similar protest was successful in 2010. Here's a video news report about the protest.

There are a number of block the boat protests happening. See this one in Seattle/Tacoma.