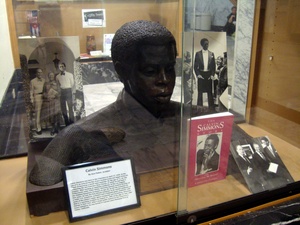 Sculpture of Calvin Simmons at City Hall in 2012.Calvin Eugene Simmons (April 27, 1950 – August 21, 1982) was a conductor of the Oakland Symphony Orchestra. He became director of the Orchestra at age 28 and was the first African American conductor of a major orchestra. He led the Oakland Orchestra for four years until his death at age 32 from a canoeing accident. Simmons was the first African American director of a major symphony.

Calvin Simmons Middle School is named for him, as is the theater at the Kaiser Convention Center. He is one of the people featured on the mural "Grand Performance" on Grand Avenue, under the I-580 overpass near MacArthur. He's on the left side, an area of the mural that's most exposed to the weather. 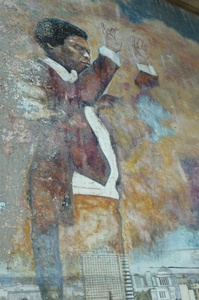 detail of "Grand Performance"
photo from Our Oakland