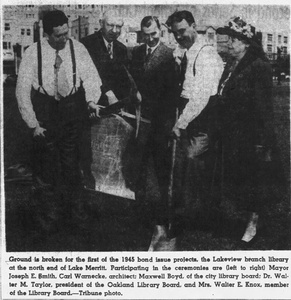 Carl Ingomar Warnecke (January 25, 1891 – March 27, 1971) was one of the partners of the Miller and Warnecke architecture firm. His son John Carl Warnecke was also a noted architect.

Warnecke was born January 25, 1891 in Montreal, Canada, to Carl Warnecke and Martha Ann McGowan (Warnecke). The family came to the U.S. in 1900, and by 1910 had moved to Oakland. Carl I. had 3 siblings, Gertrude Warnecke (Hutton), Marguerite Warnecke (Berwick), and James Warnecke.

Carl I. went to work as a draftsman for the San Francisco Board of Architects Exposition Company. He won a $1,000 prize in a design contest sponsored by the San Francisco Architects Club, which allowed him to apply to the l'Ecole des Beaux Arts. 1 He placed 6th out of 700 architecture students vying for a spot 5 at the famed design school in Paris, and was one of only 14 non-French students were accepted that year. Warnecke and his fellow Americans fled following France's entry into WWI in 1914, and the school was closed for the duration of the war. He returned to Oakland, and went to work for architect John J. Donovan. 3

He married Margaret Katherine Esterling (Warnecke) (April 11, 1894 - September 2, 1982) and they had two children John Carl Warnecke and Margaret Melanie Warnecke (Putnam). The Warneckes lived in Piedmont for a while, but mostly lived at 1224 Holman Road in Trestle Glen.

In 1917, Warnecke became partners with Chester Miller, and they opened Miller and Warnecke. John Carl Warnecke worked for the firm for a time.