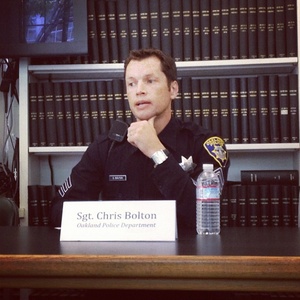 Chris Bolton (Twitter @OPDChris) was chief of staff for Chief Anthony Batts from June 2010 through October 2011 and Chief Howard Jordan from October 2011 through May 2013. He managed information requests for the OPD and he has made a commitment to enabling access to as much data and information as possible to support broad use of public information. On June 6, 2013 the Tribune announced that Bolton had been promoted to lieutenant and would be in the Bureau of Field Operations.1 A tweet posted by  SF Chronicle reporter Henry K. Lee said that the new chief of staff to Interim Chief Whent is Sgt Holly Joshi, "former PIO, youth services & internal affairs. Hubby OPD."2

He is currently supporting a small project to help identify and make public an index of the various data systems OPD manages along with a diagram of how they are connected and which contain information that may be requested as public record. The intention of this is to enable more informed public records requests and less confusion over what is possible to request.

In March, 2014 Bolton was honored by ASIS International, an international security group, for his leadership in expanding the Oakland Police Department’s use of social media technology. Bolton began taking twitter seriously on the day of the Oikos incident. Using Twitter and Nixle to push out updates, quiet rumors and send emergency alerts throughout the day, a two-person media team – Bolton and Public Information Officer Johnna Watson – was able to respond to media and keep the community informed. The experience convinced Bolton of the power of social media technology. Since then, Bolton has worked tirelessly to make the tool of social media more broadly available to officers and the community. He trains users within the department and is considered OPD’s social media subject matter expert. OPD now has a Twitter presence, a Facebook page, a Nixle connection and Nextdoor links to 127 neighborhoods in Oakland.3