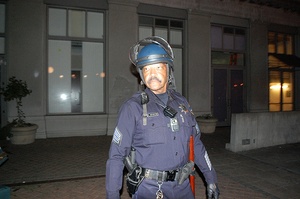 Donald Covington is a Sergeant with the Oakland Police Department.  He lives in San Ramon, CA.

On January 28, 2012 it was reported that he mocked protesters who had been handcuffed in buses for 5 hours without access to a bathroom.  "He's terrible", said @oaklandelle on twitter.

On July 5, 2012 he was shown on video threatening independent journalists with arrest simply for documenting an OPD arrest.

Sergeant Covington is one of the highest paid employees in the City of Oakland.  His total compensation in 2011 was $245,813