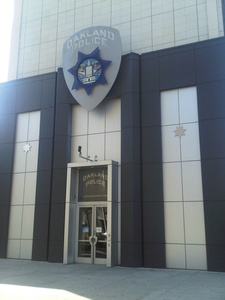 Founded in 1853, the Oakland Police Department (OPD) has a large presence in Oakland's history and is extremely influential in city politics. OPD takes up almost 50% of the Oakland annual budget. As of early 2013, the force had 612 active officers.

For those looking for services

(For non-emergency services, the office may only be open until 3pm.)

Interim Chief Whent, a 17-year veteran of OPD with a background in Internal Affairs, was appointed Interim Police Chief on May 10, 2013, two days after the resignation of Chief Howard Jordan.

History of the Department

Oakland has had a varying number of police districts in recent years.  It's dropped down to two, and in March 2013 the number was brought up to five based on input from Robert Wasserman who believes community policing will be more effective at reducing crime in Oakland. 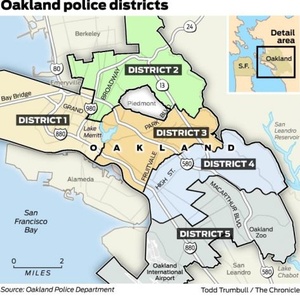 A Police Captain will be responsible for each district.

Oakland's Measure Y funded the hiring of a number of problem solving officers to focus on preventing crime within the districts they're assigned to. See a current list of PSOs here.

At any given time, some are injured or sick, so only approximately 240 officers are on patrol at any given time. Five years ago, the OPD had 330 officers available for patrol, and even then it was understaffed.  The OPD's target for proactive policing is 37% percent of an officer's time. In order to reach that target, the department needs 527 officers available for patrol. The national average for free time (not responding to a call) for an officer is 33 minutes per hour. For OPD officers it's 1 minute per hour.

On Friday, Sept 20, the 167th Police Academy will graduate.

There are a lot of important documents released by OPD. Many of them are hard to find on the Oakland website. A good place to start is here, the "Public Report" page for the department.

OaklandWiki has some pages devoted to reports: