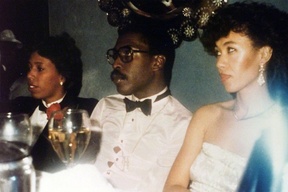 Felix "The Cat" Wayne Mitchell, Jr. (August 23, 1954 – August 21, 1986) was a drug lord from Oakland and leader of the "69 Mob" criminal organization, which operated throughout California and into the midwest selling heroin. Known as "Felix the Cat" after the cartoon character, he is credited with creating the country's first large-scale, street gang-controlled drug operation.

"As the head of a lucrative business, Mitchell loved the high life, and cultivated flamboyant tastes. He owned costly European cars, threw lavish parties, bought expensive clothing and jewelry, and transformed himself into an Oakland folk hero." 3

This last in part because he worked on his reputation. Mitchell gave money to charities, dispensed candy and toys to children in the neighborhood, and went to church.

Mitchell is also credited with such 'innovations' as using children as young as 8 years old as watchers around the neighborhood, and using drain pipes to covertly drop drugs from the rooftop to street level. Drive-by shootings, once common amongst Prohibition-era gangsters, made a comeback in Oakland under Mitchell's watch.

In 1985, Mitchell was convicted of tax evasion and multiple drug charges, and sentenced to life in prison. About a year later, he was stabbed to death by a fellow inmate at Leavenworth Federal Penitentiary.

"Thousands of people lined the streets to pay their respects as the funeral procession went through Mitchell's old Oakland neighborhood. His body was carried through crowded streets by a horse-drawn carriage trailed by 14* Rolls Royce limousines and was attended by Black Panther Party co-founder Huey P. Newton." 1 The horses pulled a glass-walled carriage and Mitchell's body in a $6,000 bronze coffin. The hearse was topped with flowers in the shape of a dollar sign. The procession ended at Star Bethel Baptist Church. Mitchell was buried at Rolling Hills Cemetery in Richmond / El Sobrante,

(* Biography.com says 4 Rolls Royces and several limosines, not 14 Rolls Royces; Oakland Hot Spot 4 says 5, and has more details. In any event, it was seriously over the top.)

Authorities hoped his conviction would decrease heroin usage in the Bay Area and beyond, but instead, the absence of Mitchell's control led to more competition, lower prices, and and heroin became more accessible. The resulting phenomenon is sometimes called the "Felix Mitchell Paradox."

Around the time of his death, crack cocaine started appearing in cities, also increasing drug use.