On June 19th, 2013 the Oakland Police Department unveiled their "high visibility command post" (aka mobile surveillance unit) at two locations: 24th and Telegraph and Grand and Bellevue. (see nixle alert) The command post is intended to deter crime in hot spot areas. The Grand Lake area was chosen for recent thefts of smart phones and tablets. The mobile unit can see in 360 degrees for a 4 block radius (see KTVU report).

While some people are pleased about this development as a crime deterrence, others feel OPD has stepped into the role of unwanted surveillance. 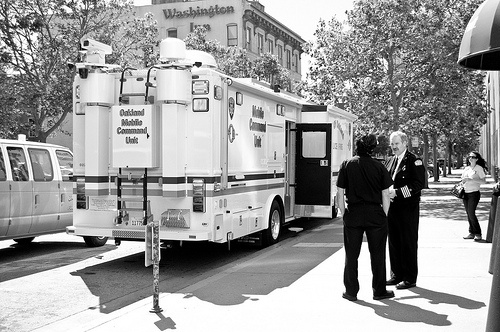 photo of the command post from 2011. photo CC BY-NC-ND 2.0 by Desmond Henderson