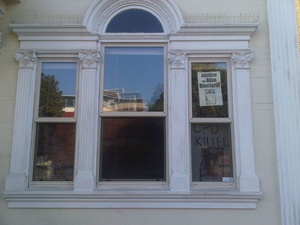 "Justice for Alan Blueford!" poster in house window in Chinatown (March 2013)Alan Dwayne Blueford was an eighteen year old Skyline High School student who was shot and killed by Officer Miguel Masso of the Oakland Police Department on May 6, 2012. On October 3, 2012, Alameda County District Attorney Nancy O'Malley issued an 18-page report finding that the shooting was justified. Support for this finding included reports from citizens that Mr. Blueford was holding a gun in his hand when he was shot, and reports from Officer Masso that Mr. Blueford was pointing the gun at the officer. Mr. Blueford's family and others believe the shooting was unjustified, and discount the DA's report.