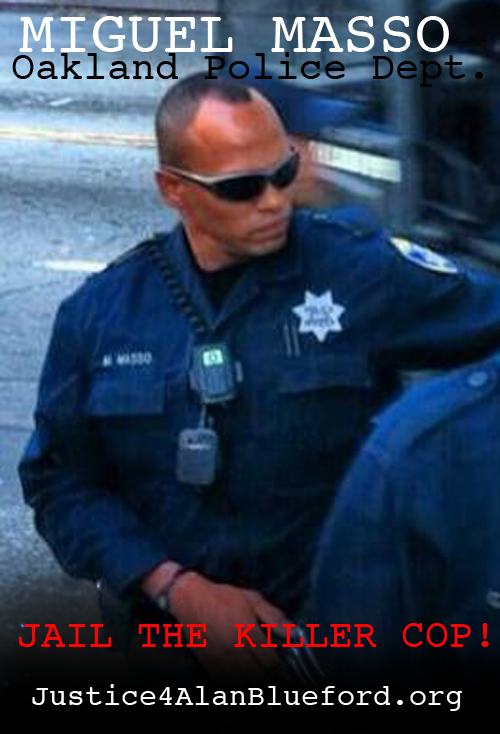 Miguel Masso - August 24th, 2012
14th & Broadway - Oakland, CAMiguel Masso was an officer in the Oakland Police Department who shot and killed Alan Blueford on May 6, 2012. Prior to getting hired by the Oakland Police, Officer Masso worked for the NYPD.  In 2007, Masso along with three other officers were accused of beating, macing, and tasseling a man in his holding cell at the 52nd Precinct station in the Bronx.  After beating him, Masso allegedly refused his requests for medical attention.  The case was settled for $54,000.

On May 6, Miguel Masso shot and killed Alan Blueford.  Initial reports indicated a gun battle.  But later reports clarified that Blueford never fired a round, and that Masso shot Blueford three times, along with shooting himself in the foot.

Masso was officially cleared of any wrongdoing by the Alameda County District Attorney's office.1 A full list of the official documents regarding the Blueford/Masso incident can be viewed here.

The Justice for Alan Blueford group (J4AB) has actively called for the firing of Masso.

Masso now works for the Hollister Police Department in the small city of Hollister, California.