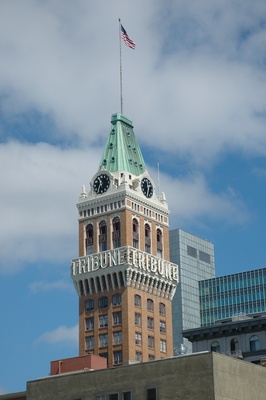 The Oakland Tribune (February 21, 1874–April 4, 2016), was for over a century Oaklandʼs major daily newspaper. The Tribune, now owned by the Media News Group, as of April 5, 2016 became known as East Bay Times, an edition of the San Jose Mercury News rather than a separate publication.

In 2007, the Oakland Tribune moved from the Tribune Tower to new offices on Oakport Street, across Interstate 880 from the Oakland Coliseum. In 2012, the Tribune moved their offices back to downtown Oakland, with offices at 1970 Broadway. The Tribune Tower, a local and national landmark, remains, now housing several businesses and a ground-floor cafe. On March 1, 2016, the Bay Area News Group announced that the Tribune and the Contra Costa Times would be combined into a new paper (the East Bay Times), and the Trib will now be published as a weekly. 1 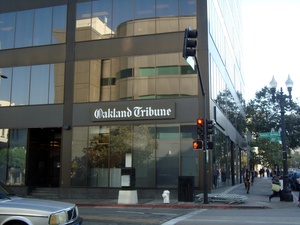 In 1995, the Oakland Tribune donated its collection of news negatives and photographs, also known as its photo “morgue” to the Oakland Museum of California. The collection, with about 3,000 negatives and a million photographs, documents the history of the Bay Area and California from the early part of the century through the 1990s.  Copies of these images can be purchased from the museum. For more information, e-mail [email protected].