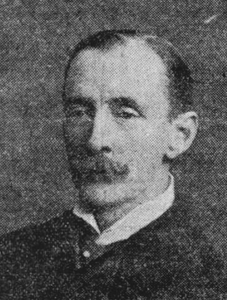 The Dargie's father John died in an unusual fashion. Police theorized that he missed his stop, then jumped or fell off the platform and drown in the mud near the 7th Street railroad bridge. 4, 5 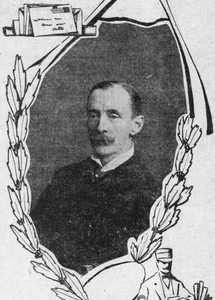 Like his brother William, Dargie went to work for the San Francisco Bulletin, and learned both the printing and business sides of the newspaper business.

Later Dargie worked for his brother, serving as secretary of the Tribune Publishing corporation.

The letter carriers appreciated his work. In 1903 he had a special census taken, showing that Oakland had more than 75,000 residents. This put the city in the highest grade, which gave the carriers a $150 per year raise. 8 Dargie was respected for his job at the post office, especially after the 1906 earthquake made for a huge increase in mail volume in Oakland.

He was reappointed in 1906 2 but died before completing the term.

Dargie was devoted to his job and worked extra hard following the 1906 earthquake, but his health began to decline. After battling illness for several months, he died at home 6. Rev. David McClure presided over the funeral service, held at St. John's Episcopal Church. Friend and former mayor Melvin C. Chapman spoke at the funeral. Eight letter carriers served as pallbearers, and the post office was closed for the afternoon. 3 Flags were flown at half-mast on public buildings in Oakland. Thomas is buried in the Dargie family plot in Mountain View Cemetery. 7