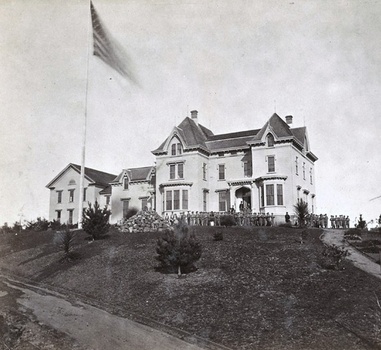 The California Military Academy, a/k/a McClure’s Military Academy or Oakland Military Academy (1865–c.1920), reportedly the West Coast’s first military school, was founded and led by Rev. David McClure1, and opened January 9th, 1865. The 1870 census lists 5 teachers besides McClure, as well as 86 students. Its original location was on Ninth Street near Franklin. In 1867, the corner of Telegraph Avenue and Prospect Avenue (now 29th Street) was purchased for a larger school, and various buildings constructed to house the school. The school moved to this location in 1868. 6

1873 was a bad year for the school. In September, all the buildings except the main house burned. 3, 6 (Sheriff Harry Morse’s son was tried for setting the fire, 4 but found not guilty.5) UC President Gilman then let the school use the recently vacated UC campus in Oakland during the rebuilding, but then, in November, the instructors quit en masse. 7 (One wonders if the fire were set by a disgruntled instructor!)

By 1874, McClureʼs son (Major) Stewart McClure was a military instructor there. According to an 1887 advertisement, the school offered “thorough preparation for college or business life” and at the time, Col. W. H. OʼBrien was Principal.

Few non-Oakland Wiki junkies today realize that prior to the coming of the hospitals (now all borged into “Summit”), the Pill Hill area was full of martial training grounds (CMA was the first, but not only, military academy there)—an area more dedicated to ending lives than saving them, as it were. Since this school began only a few months before the close of the Civil War, it seems likely that many of its alumni saw little if any combat; parents sent their energetic sons to this and other local military academies mainly to give them a good education combined with firm discipline. 6 However, they did train with actual firearms and were drilled in military marching and maneuvers. (If Iʼm reading the old map correctly, the school’s training/marching grounds look to have been about where Grocery Outlet is today.)

The institution was still going strong in 1912, but had disappeared from local maps by the 1930s. More research is needed to pin down exactly how, why, and when it ceased to exist. 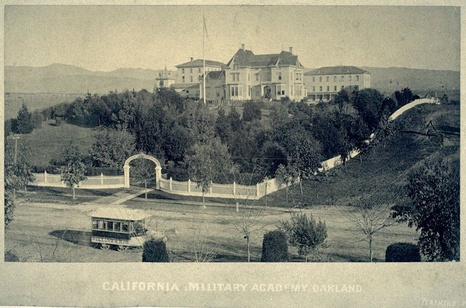 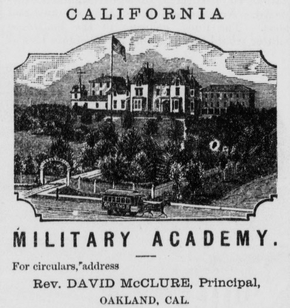