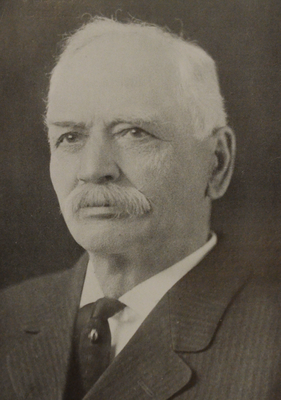 Chapman was born in Westfield, Illinois to Charles de Grasse and Cynthia Palmer. He was educated in Chicago from 1856-1867. He graduated from Onarga Seminary in 1870. Following graduation he worked as a bookkeeper in his father's planing mill. After 3 years of working for his dad, Chapman came west to San Francisco and started work in the real estate and stock brokering business. In 1876 he moved to Oakland but kept some business there until 1882 5

In his spare time, he studied law (under Mayor William Davis's law partner Henry Vrooman) 6 and joined the bar in 1884, deciding that law was his true profession. After being admitted to the California State Bar Chapman he practiced law with Roscoe Havens as Chapman and Havens. He then went on to work as a sole practitioner until 1910 before establishing the law firm of Chapman and Trefethen along with E. E. Trefethen. 9 His offices were located in 609 Central Bank Building, Oakland. While working alone, he was the main lawyer for the Oakland Traction Co. in 1911. 5 Eventually he became president of the Alameda County Bar Association. A true renaissance man, he was also head of the Oakland Tribune Publishing Company. 4 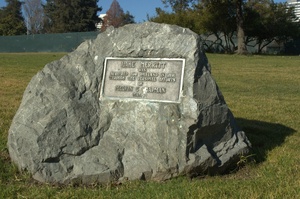 plaque honoring Melvin C. Chapman
photo from Our OaklandAfter serving one term as mayor, having run on a platform of “street, sewer, plaza, and park improvements, reclamation of the West Oakland marsh, dredging of Lake Merritt and construction of a boulevard around the lake,” Melvin Chapman did not seek re-election. While mayor, Chapman was influential in getting the deed to land around Lake Merritt from the Oakland Waterfront Company and making it into a park. 8 (read more about that and the complicated contemporary politics involved here.)

In recognition of his efforts, he was given a rock. A rock with a plaque 10 on it to be sure, and it's a very nice rock, but... ....At least he finally got to retire?

Chapman married Lillian M. Childs on December 21, 1887, and the couple had one son, Melvin C. Chapman, Jr. Lillian Childs was the daughter of W. W. Childs, Remillard Brick Company Superintendent, a brick manufacturer based in Oakland. The family resided at 667 Wesley Street, Oakland.

In 1892 Chapman sued the Enquirer Publishing Company for $10,000, alleging they had damaged his good name. 1

Chapman was the mayor before George Pardee and there was a question of whether Pardee would be recognized. Chapman wanted to know who would post the bond for the mayor-elect. (?) The new, non-partisan City Council and Mayor were worried that Chapman might appoint someone they disliked to the Board of Public works, so at 12:01 (a minute after midnight) on April 1, 1893, they moved into City Hall. They elected John Towle to the position. Meanwhile, Chapman had appointed Charles Wilkins, who later resigned to keep the peace. 3 Councilman William Dow proposed a resolution that would ratify the bonds and Pardee approved it.

Then-Chief of Police Louis Shaffer took Chapman’s side and wouldn’t allow the new group into the offices. Chapman declared the above actions illegal. The City Attorney and the City Auditor Snow took Pardee’s side. Chapman claimed he would step aside when the law allowed (it was a later date) and when Pardee had legally produced the bond. He also stated that he had not intended to appoint a commissioner. 2

He was a member of the Athenian Club. 5