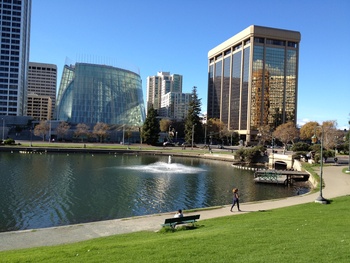 Lake Merritt, considered the "jewel" of Oakland, California, is a large 155 acre lake located east of Downtown Oakland. ​Technically a tidal lagoon, it connects to the bay via a channel and the estuary. It is the nation's largest body of salt water within city limits. Lake Merritt is named for Samuel B. Merritt, who was influential in its creation. 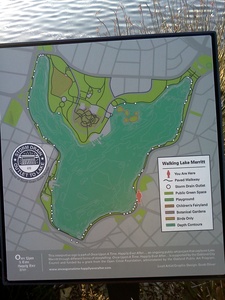 One of the interpretive signs that are part of the "Once Upon A Time, Happily Ever After…" art project. 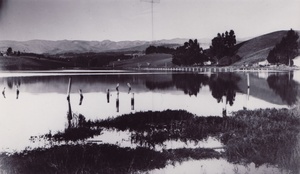 Late 1800s Lake Merritt (Courtesy of the Oakland History Room, Oakland Public Library)The area now known as Lake Merritt was originally a tidal estuary of almost 1,000 acres, fed by several streams in the San Antonio watershed. It was a source of fish and game for Chochenyo people, until their relocation to Mission San Jose by the Spaniards in 1810.​ The lake was granted to Luis María Peralta in 1820 by the Spanish crown, as part of his 45,000 acre ranch.

As Oakland developed, the lake's natural landscape was transformed into part of the urban fabric. A toll bridge across the southern end was built in 1853 by Horace Carpentier. By this point the lake was used as an open air sewer; wooden channels were built to send offal to the bottom, where it would decompose in the acidic water. A dam at 12th Street was proposed by Dr. Samuel Merritt to deepen the lake and control the flow of water, and was built in 1868 with his own funds as a concerned property owner. This dam created the Lake as it is now. Originally, water covered much of the land around the current area of the Lake (for example, water used to cover the area where Laney College is now located)[source: OCCUR Chinatown and Central Oakland Neighborhood Profile, 1995, from Oakland History Room]. The dam also allowed people to travel from one side of the lake to another without rowing or paying Carpentier's tolls.

The lake was dredged in the 1890s, and cleaned up somewhat as part of the "City Beautiful" movement in the 1900s. Roads were built to ring the lake, and a "Necklace of Lights" was added in 1925. Pumping stations were built in the 1970s to control salinity and runoff levels. Fountains were installed to re-oxygenate the water, and culverts were re-opened under 12th St as part of Measure DD construction.​ The lake now no longer deserves its nickname "Lake of 1000 smells", and has regained its status as the "Jewel of Oakland". 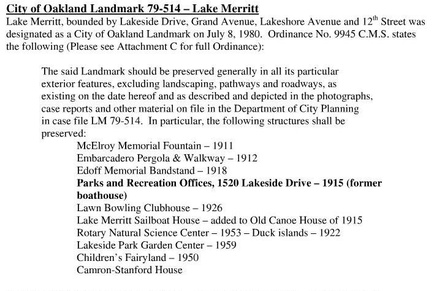 For more stats and photos, check out the comprehensive timeline of Lake Merritt History. 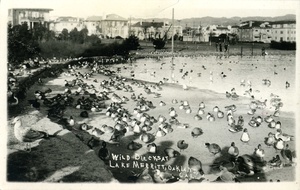 Wild Ducks (Courtesy of the Oakland History Room, Oakland Public Library) Lake Merritt provides a temporary home to thousands of migratory birds: notably Canada geese, egrets, cormorants, scaup and pelicans. The lake was recognized for its natural significance in 1870, and was protected as the first wildlife refuge in North America. It sits on the Pacific Flyway, an important route for birds on the west coast. The lake also is the home of the urban legend of Messie, a reclusive lake monster with a pervasive body odor. 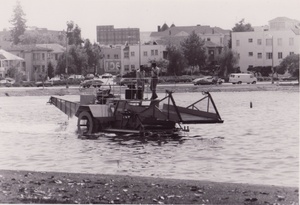 Lake maintenance: weeding and dredging. (Courtesy of the Oakland History Room, Oakland Public Library)Within Oakland and Piedmont, Lake Merritt has a watershed of 7 square miles. Approximately 4,670 acres drain into the 140 acre Lake, a ratio of 33:1. The Glen Echo Creek watershed includes 1,640 acres and accounts for about 40 percent of the Lake’s drainage area. Sewers deliver storm runoff directly to the creek, increasing volume and flow.

The Oakland waterfront has been heavily modified, and Lake Merritt is part of the historical San Antonio Creek (watershed map). The west end of Alameda was attached to the Oakland shoreline, and freshwater drained from the Oakland hills into the marshes (which covered present day Lake Merritt and more), and northwest into San Francisco Bay. Several streams once fed into the marshes that occupied the Lake Merritt area, streams which still run but have almost entirely been buried underground in storm drains. The creeks included 3 branches of Glen Echo Creek; Pleasant Valley Creek; Bushy Dell Creek; Wildwood Creek; and Indian Gulch (Trestle Glen) Creek. Small, isolated remnants of unburied creeks can still be found, usually situated between property lines.

If tidal flows and rainwater enter Lake Merritt at the same time, water levels can rise quickly and floods can occur. For every inch of rain, it is estimated that lake waters will rise one foot.

Since runoff is not mediated upstream, the Alameda County Flood Control District controls lake levels by restricting incoming tides at Seventh Street. But because closing tide gates limits natural tidal flushing, the lake suffers from untenably low levels of dissolved oxygen caused by the accumulation of pollution and floating trash, and is listed as an “impaired water body” by the Environmental Protection Agency.

Urban runoff also contributes to the sedimentation of the lake, especially at the Glen Echo Creek and Trestle Glen Creek outlets. In their 1992 report for the city, Uribe and Associates calculated the sediment accumulating at the mouth of Glen Echo Creek to be 1,090 cubic yards—the volumetric equivilant of 10 tank trucks-— annually, and recommended that it be removed to the landfill every two years.

A recent dredging removed an estimated 22,300 tons of mud from the Glen Echo and Trestle Glen arms of the lake. An informational pamphlet about the project reassured the community that dredging is no different than using a “giant vacuum cleaner” to “suck out the muck”. Once solids are removed in a dewatering tank, they are taken to the landfill. 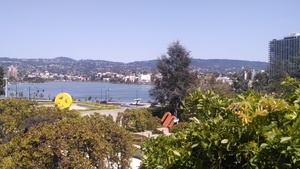 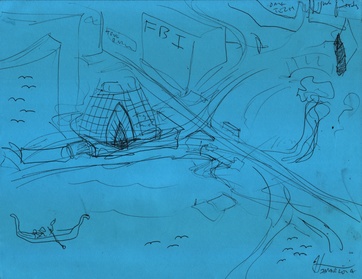 At the northwest section of Lake Merritt with the Cathedral of Christ the Light and a gondola. Made during Draw Oakland. (CC0)Read more about Oakland's water system here. 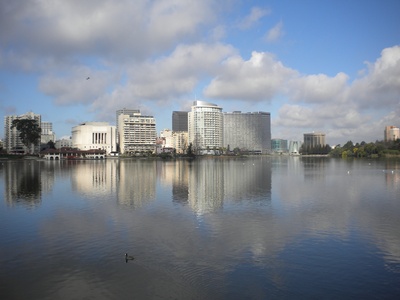 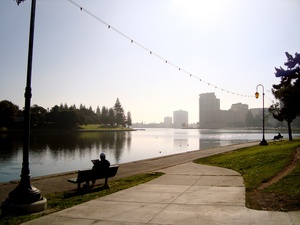