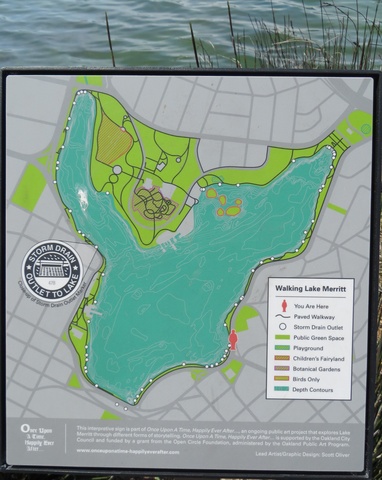 All of the 62 Oakland Storm Drain Outlets which empty into Lake Merritt have been mapped, and there is an interpretive sign showing their locations, which is a part of the Once Upon A Time, Happily Ever After Project.  It would seem that one of the main purposes of this public art project is to make residents more aware that what they dump into the gutters ends up in Lake Merritt.

Each one of the outlets is marked with an identical embedded, metal marker, each with its own unique serial number. 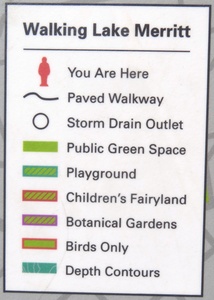 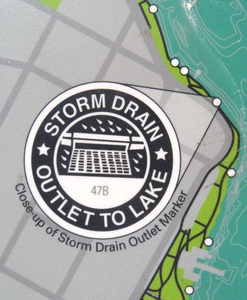 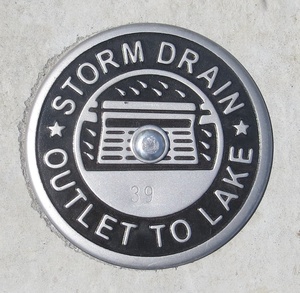 "Most of the storm drains and culverted creeks that empty into Lake Merritt are invisible. They are none-the-less part of an important underground network that physically connects a seven square mile area and over 50,000 Oakland residents to Lake Merritt and, in a round about way, to one another. In addition to carrying fresh rainwater from the streets of surrounding neighborhoods to mix with salt water from the bay, the drains also carry what’s referred to as “urban runoff”—plant debris, trash (21,160 lbs. of it was removed from the lake in 2008 alone), and other pollutants like paint, soap and motor oil.

The network of storm drains is an apt metaphor for the less visible ways in which the physical environment of the city, our lives, and natural phenomena are all interconnected and inextricable, elements of place. The interpretive signs are meant not only to illuminate that complexity but also to provide a specific and enriched context within which each visitor can establish or maintain a connection to the place we call Lake Merritt." 1