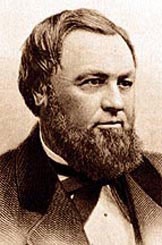 Dr. Samuel B. Merritt (March 30, 1822–August 17, 1890) was a physician, the 13th mayor of Oakland, donor of much of what is now Lake Merritt, one of the founders of Mountain View Cemetery, and the first President of the Oakland Library Association (founded in March, 1868). 1 Merritt Hospital was created by his bequest, and Samuel Merritt University bears his name.

According to the 1887 Oakland Directory, Samuel Merritt, capitalist, was residing at 1213 Madison Street, Oakland.

Born in Maine in 1822, Samuel Merritt graduated from Maine’s Bowdoin College medical department in 1843. He was practicing medicine in Massachusetts when Daniel Webster encouraged him to move to California, giving him letters of introduction to friends there. He purchased a ship, stocked it with cargo, and sailed from New York in 1849. His timing was excellent, arriving in 1850 after a large fire in San Francisco, he was able to sell his cargo at a handsome profit.

Merritt briefly practiced medicine in San Francisco, but after a day trip to Oakland, largely abandoned his practice in favor of real estate investments, which included a large area next to the lake that now bears his name. He moved to Oakland in May 1852. He purchased 40 acres on the banks of what was to become Lake Merritt, established a lumber yard and built his estate at 12th and Jackson Street. 5

He subdivided and sold some of the land, and built a number of homes, including Camron-Stanford House.

An 1873 City of Oakland and Town of Brooklyn directory states:

Dr. Samuel Merritt has erected six large and elegant dwellings on his tract, north of Fourteenth street, and east of Alice street, worth in the aggregate, $75,000. These buildings have been sold to various parties by Dr. Merritt, who had in previous years erected numerous costly dwelling houses in the same locality.[2]

Merritt served on the City Council in 1862. When W. W. Crane, Jr. resigned in 1867, the town council solicited him for the Mayor’s job. He became the 13th mayor of Oakland. Along with helping to settle many land disputes in Oakland, Merritt is credited with helping ensure that Oakland became the terminus of the transcontinental railroad. He then spent time focused on the lake and surrounding property, and orchestrated the creation of floodgates to regulate the flow of water. 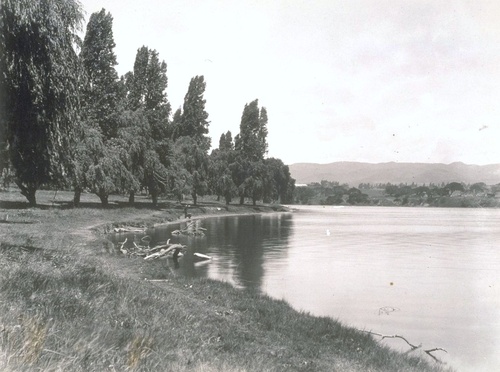 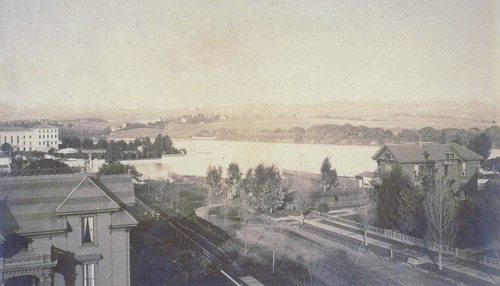 Laguna Peralta, along whose shores Samuel Merritt and other homeowners lived, was the dumping ground for much of the city’s sewage. His grand plan to remedy the smelly situation was to petition the Oakland City Council for financial assistance and those funds, along with money he personally contributed, was used in the construction of a dam on the lagoon outlet, along 12th Street. The dam limited tidal changes, which kept the sewage submerged, and less visible in the newly formed lake.

Stray bullets from hunters shooting at the lagoon’s birds tended to endanger the homeowners. In 1870, fed up with the near misses, Samuel Merritt took legal action, petitioning the courts up to the California State level that the lake be designated a protected refuge. With passage of the first such municipal protections in the country, none of the lake’s waterfowl or wild animals could be hunted. 1 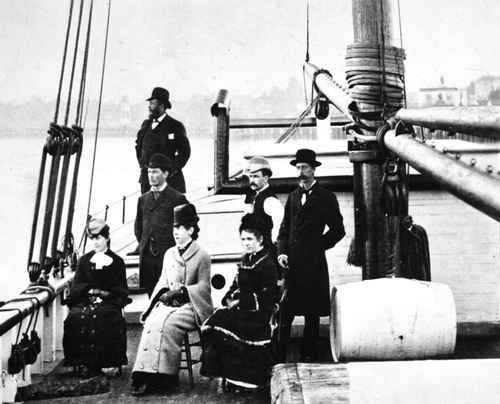 The 1870 census shows Catherine and Seward living with Samuel, along with a bookkeeper, two servants and two laborers. His real estate was valued at $250,000 and his personal estate at $100,000, and his profession listed as “merchant.” Seward died in 1877. The 1880 census doesn’t include estate values, but lists Samuel’s profession as “lumber business.”

Merritt was a large man, 6′ 3″ tall, weighing 340 lbs. His large girth likely contributed to his diabetes, which ultimately caused his death. After his death, his sister saw that his wishes were carried out, and founded Samuel Merritt College in his name in 1909. Merritt is buried in Mountain View Cemetery, Plot 35, Lot 2. 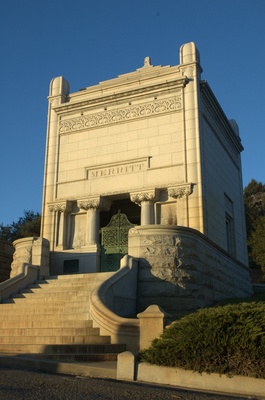 CC SA-BY Our OaklandThis miniature Mausoleum of Halicarnassus (one of the Seven Wonders of the Ancient World) was erected as the final resting place of Samuel Merritt in Mountain View Cemetery.

The tomb of King Mausolus (377–353 BCE) and his wife/sister Artemisia II of Caria (d. 350 BCE) was erected c. 353–350 BCE in Bodrum, Turkey, and was described in the writings of the Roman historian Pliny the Elder (23–79 ACE). In the 1850s the British Museum dispatched archaeologist Charles Thomas Newton (1816–1894) to excavate the Bodrum site. Hypothetical reconstructions made by Newton of the mausoleum influenced subsequent generations of Beaux-Arts-trained architects interested in quoting antique funerary precedents — including those responsible for our Dr. Merritt’s memorial.