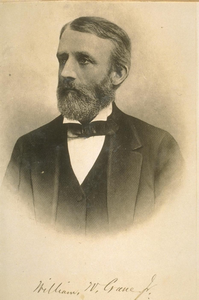 W.W. Crane 3William Watrus Crane, Jr. (September 14, 1830–July 31, 1883) served on City Council in 1863 and was elected the 12th mayor of Oakland from March 1867 to November 1867. Crane was unable to complete his mayoral term due to poor health and although offered the Republican nomination for California Governor, had to turn down the offer because of health issues. Crane was a member of the Oakland Guard.1

Later in life William W. Crane became president of the Oakland Gas and Light Company, and also a bank director. Crane was a poet and essayist, contributing to The Overland Monthly and author of Politics: An Introduction to the Study of Comparative Constitutional Law.

William married Hannah Sarah Austin (1837-?) in 1856 and they had one child who survived past infancy, Mary Nancy Crane. They moved to Oakland in 1862. The Cranes lived at the corner of 10th and Market in Oakland, in a home built in 1874.2 Note that in some records his middle name is spelled Watrus, and in others, Watrous.