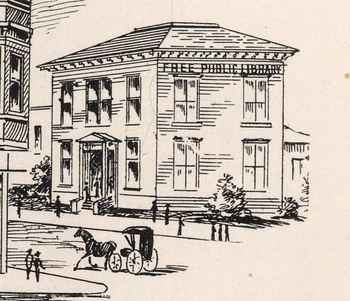 The Oakland Public Library has been serving the citizens of Oakland since 1878, and was the second public library in California.

The Oakland Library Association was a subscription-based library started March 5, 1868. It was located on Fourteenth Street, near Washington, on City Hall square. Members contributed $6 annually to a fund, from which all expenses were paid and additional volumes placed on the shelves. In 1876, there were about 350 members, and the library contained over four thousand volumes.

The Oakland Free Library was opened in 1878, the second public library in California after Eureka. The Rogers Free Library Act of 1878 allowed cities to levy taxes for the support of public libraries. Once that was passed, the library association moved to transfer all its assets to the city of Oakland.

Ina Coolbrith was the first Oakland librarian. In 1893 her nephew Henry Frank Peterson (who had been the first assistant) succeeded her. Charles S. Greene took over in 1899.

Mabel W. Thomas, assistant librarian and chief reference librarian under Greene, began a collection of books, periodicals, and other material that were the foundation of the California Room in the 40s and are now in the Oakland History Room.

... [Am doing further research to see if there was anything library services before that time ... this is an ongoing project ... please do not delete or edit too dramatically - JL]

North side of Fourteenth Street between Washington and Clay. The reading-room has on file all the principal newspapers published on the Pacific Coast, together with the most prominent journals and magazines of the East. Branches of the readingroom are established at 1704 Seventh Street, West Oakland, and 622 East Twelfth Street, East Oakland. The rooms are open daily (holidays excepted) from 9 A. M. to 9 P. M. The library, containing a choice collection of nearly 11,000 volumes, is open daily (Sundays and holidays excepted), from 9 A. M. to 8 P. M. Librarian, Miss Ina D. Coolbrith; First Assistant, Henry F. Petersun Second Assistant, Miss Lillie Marsh.