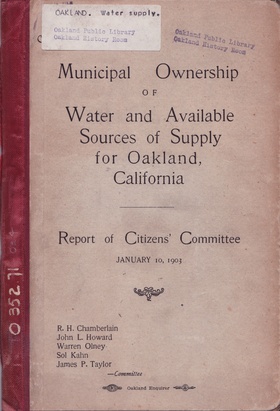 1903 Citizens' Committee Report (Courtesy of the Oakland History Room, Oakland Public Library)Oakland’s charter made no mention of water development ; creeks and shallow wells provided sufficient water for the local community (population 75 [when?]). Even after the commoditization of water in the late 1860’s, the Contra Costa Water Company, founded by Anthony Chabot, was piping water locally, first from a private well, and by 1867 from a reservoir on Temescal Creek.

Oakland’s population rose quickly in the next several years—to 10,500 by 1870—and citizens began to question the quality and consistency of the local water supply. When Chabot sunk new wells near the city’s slaughterhouses, a fearful public briefly clamored for a municipally owned system. Recurring citizen efforts were never successful, the city instead voting to aid private companies like Chabot’s. The city did not outgrow its local supplies until the 1910’s. 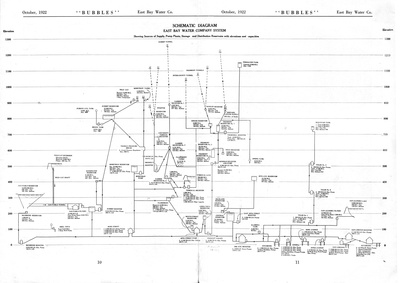 Schematic Diagram of the East Bay Water Company System, showing sources of supply, pump plants, storage, and distribution reservoirs with elevations and capacities. (Printed in "Bubbles", a publication of the East Bay Water Company, October 1922.)The city currently sources 90 percent of its water from the Mokelumne River watershed, 90 miles east of the city. During years of extreme drought, such as 1976-1977 or 1987-1992, the system was unable to sustain the demand for water and instituted water rationing.

The Oakland Museum of California site has detailed interactive maps of Bay Area creeks and watersheds. You can click on different sections of the map to see detailed watershed details, including historic water info.

Check out this schematic of the Sacramento and San Joaquin river systems, detailing sources for the Bay Area’s water supply. [Source:California Department of Water Resources, Division of Flood Management]

Simple site: Where does my water come from?