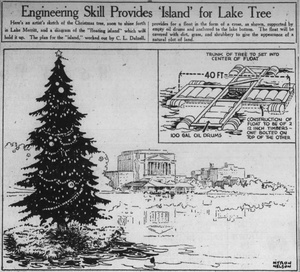 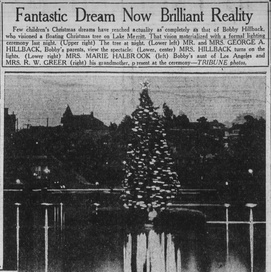 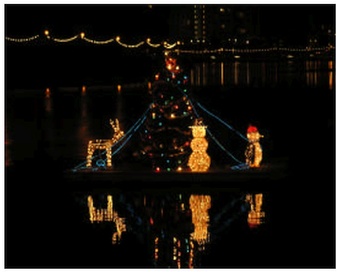 After Robert's father had put the idea out and gotten support from various organizations including the Elks, the Lions, and the Optimists, the last hurdle was getting the OK of the parks board. Robert's original idea was to put it on 'Duck Island' in the wildlife refuge (the other islands weren't yet built), but that was vetoed because of the disturbance to the birds. 7 The board OKed a floating island on October 29th, and things happened very rapidly after that.

The raft was designed by G. L. Dalzell and constructed by the Thomas Rigging company, which also donated the lumber. Oil drums were donated by the Union Oil company, and a 60' Douglas fir tree was shipped from Oregon by the McCormick Steamship company. 4 PG&E donated 500' of underwater cable to provide the electricity. 5 Westinghouse donated 500 colored bulbs, and the Electrical Supply Company donated speakers to place on the raft so music could be heard. 6

Financial support included the Oakland city council ($449), the Elks club ($100), George Hillback ($50), an 8-year-old friend of Robert's who brought in 50 cents, and Robert's classmates, who brought an envelope with $2 in change. 9

After planning, fundraising and construction, on the night of December 14th, speeches were given, music sung, and then Robert's mother flipped the switch and illuminated the tree for the first time. 2 December 14th was the night of the annual Oakland Christmas Pageant.

In addition to amplifying the music across the lake, the Christmas music was also broadcast on radio. 10

People remember a floating Christmas tree at Lake Merritt in the 1980s. The Lake Merritt Institute had one as late as Christmas 2005. Vandals used the power cable to pull the tree to shore, and stole the lighted deer and penguin. They were able to replace the deer and re-anchor the island, but they couldn't find a replacement penguin. 3 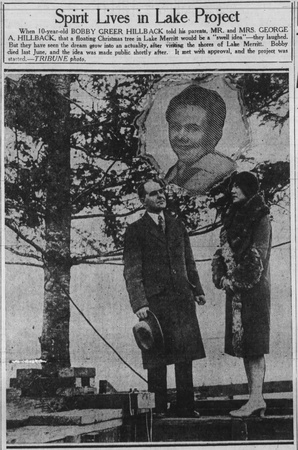