This entry provides an expanded history of Lake Merritt.

c. 1820: Don Luis Peralta owns the “lake” as a part of Rancho San Antonio. It was used as a transport terminus for goods, especially lumber (“El Embarcadero” = “the pier”) 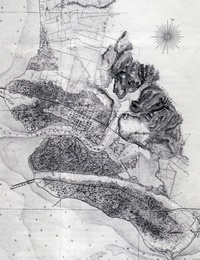 1853: Horace Carpentier builds the 12th Street toll bridge across San Antonio Creek to connect the town of Oakland and the community of Clinton (later part of Brooklyn).

View of the Lake looking east towards Trestle Glen Creek, taken between 1870 and 1900. (Courtesy of the Oakland History Room, Oakland Public Library)

1874: Merritt, Newton, and Spaulding cede 12th Street dam rights to the City. The name, Lake Merritt, is used for the first time. 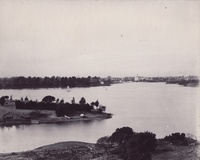 1891: At the urging of Mayor Melvin Chapman, the Oakland Waterfront Company, which was controlled by the Central Pacific Railroad and Southern Pacific Railroad, “gives” the lake to Oakland in exchange for a promise that the City would spend $30,000 on the roadway over the 12th Street Dam. 9-6-30 Trib.pdf

Physical improvements to lake begin, including a rock embankment for flood control and dredging to create Lake Edge Park.

1892: City Engineer, William Boardman, reports a sedimentation rate for the lake of one inch per year.

Lake Merritt, Oakland, California [between 1898 and 1905] (courtesy Library of Congress) 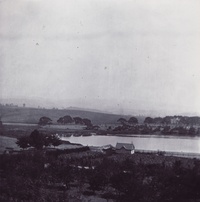 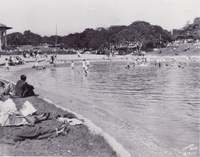 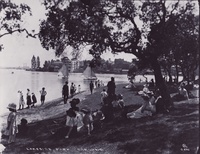 1915: Lake dredging completed and the 12th Street Dam is raised, widened, and paved.

1916: White sand beach constructed near “the willows”, part of a plan to market Lake Merritt as an inland bathing resort.

1925: The “Necklace of Lights” is lit for the first time during the Dons of Peralta Water Festival. There are 126 lampposts, each given by an organization or an individual, connected by a string of 3,400 bulbs.

1931: National Championship for outboard racing is hosted on the Lake.

1935: Large quantities of striped bass appear in the Lake after high tide. According to the Lake Merritt Institute, the fish were so plentiful that they could be “taken by pitchforks”.

1941: The “Necklace of Lights” goes dark and is removed, for fear Japanese bombers will use it for navigation

Flood! 9.5 inches of water fell within 24 hours, and the water level of the Lake rose to 7.3 feet above normal.

1980: The Lake (and surrounding area) is designated as a landmark by the City of Oakland.

1982: First Festival At The Lake, an annual multi-day, multicultural food and arts fair.

c. 1986: The ear-shattering, exhaust-fume-spewing 4th of July speedboat redneckathons, an annual event since the 1920s, finally cease, to the great relief of terrified birds and fish everywhere.

1992: The Lake Merritt Institute is founded.

1995: The first aeration fountain is installed by the Lake Merritt Institute in order to increase oxygen levels in the Lake water.

1997: Final Festival At The Lake (poor attendance, likely due to its reputation for violence).

1999: Two additional fountains are added at Bandstand Cove and at the Trestle Glen arm of the Lake.

2013: An online petition aims to ban smoking around the Lake.