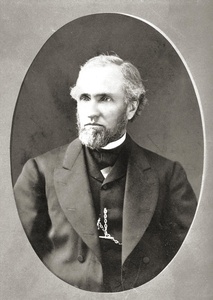 Henry Huntly Haight (May 20, 1825–September 2, 1878) was an attorney who was the 10th governor of California, serving from 1867–1871. While he may not have lived in Oakland (he lived in San Francisco and Alameda 2 before being elected governor, and then returned to Alameda after his term as governor), he had a significant impact on Oakland by signing the bill that made Lake Merritt the first wildlife refuge in the United States. He also signed the bill that created the University of California. And like many notable Californians, Henry Huntly Haight is buried in Mountain View Cemetery.

Haight was on the board of Oakland's Union Savings Bank and the Oakland Gas Light Company. You might think it was his banker uncle also named Henry Haight, but an 1874 directory listing uses the name "H. H. Haight" for both entries, mentioning the Alameda address, and his uncle died in 1869.

Haight was born in Rochester, NY in 1825. After graduating from Yale in 1844, he passed the bar in 1846 and practiced law with his father in Saint Louis, MO. There he met Anna Elizabeth Bissell Haight (October 2, 1832–March 29, 1898) and they married in 1855. By 1860 they had moved to California. Henry's father eventually joined them in California and once again they practiced law together until Henry's nomination for governor.

Henry Huntly Haight was the nephew of banker Henry Haight, who Haight Street in San Francisco is named for.

On September 2, 1878, Haight fell ill at his law office in San Francisco. Seeking medical help, he went to a nearby bathhouse where he died 2. Henry, Anna and the children are buried in Mountain View Cemetery in plot 11. Also buried in the grave are Paul Leslie Haight (September 20, 1876–October 11, 1876) and Lewis Douglass Bissell (c.1840–November 30, 1861). Henry's father Fletcher Mathews Haight is also buried there, after his remains were moved from Laurel Cemetery in San Francisco in 1877. 2 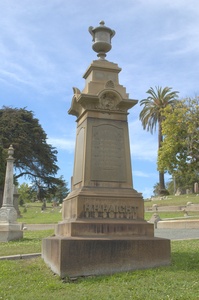