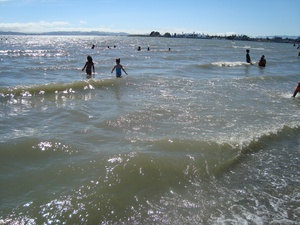 Alameda is a city surrounded by Oakland and the San Francisco Bay that should have been annexed by Oakland. Although Alameda is now effectively an island, it was previously connected to Oakland through a small land mass that was dredged out to complete the Oakland Estuary, also known as San Antonio Creek.

Despite being nicer in some ways, Oaklanders almost never go to Alameda, and frequently disparage it unfairly. This has earned it the nickname "Oakland's Oakland", after the way that San Franciscans view Oakland, which is objectively better than San Francisco, and yet maligned by uninformed West Bay dwellers who are afraid to visit.

Alameda is also referred to as "The Isle of Denial." [ source? ] 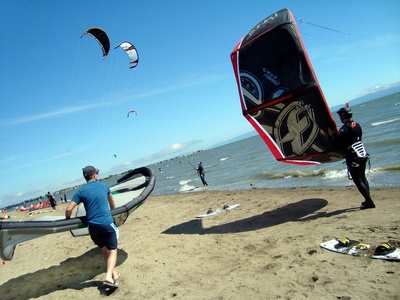 The main beach that many folks go to is the Robert W. Crown Memorial State Beach. You can get there by going through the Posey Tube and then continuing down Webster until you hit the park/beach. There's a big park, picnic tables, etc., and also lots of beach. If you follow the shoreline towards the southeast, there's lots of nice shoreline walking/biking along Shoreline Dr.

Alameda is warm (sometimes warmer than Oakland), so you can often have a nice day at the beach. The beach is also a popular spot for windsurfing.

If you'd like a different feel from many parts of Oakland and want to spend some time in a place that feels like a small town but that is not very far away, Alameda is for you. The main drag is on Webster Street and at the end of Webster is Washington Park and the beach.

There are 3 bridges and two tubes going between Alameda and Oakland.

The bridges are on Fruitvale Ave, High Street, and 29th Ave. The 29th Ave bridge is the closest one to downtown, but it's a bit tricky to get on it. If you're going East on 12th, turn right onto 22nd. This will turn into 23rd and then it will become the bridge. Coming back to Oakland on this bridge, you will pop out on 29th Ave and 12th St. The other two bridges are straightforward.

Cars can go on the tunnel and on all 3 bridges.

You can walk and bike across the bridges, but if you find yourself downtown or in Chinatown and want to get to Alameda, you'll have to walk/bike through the terror tube. A much safer and more pleasant experience can be had on the FREEEE Estuary Crossing Shuttle - a free bus with room for 10 bikes that goes between Alameda and Chinatown/Laney College. It only runs on weekdays though. There are also AC Transit buses that go through the tunnel and across the bridges.

If you DO want to walk or bike through the tube, there is one very narrow path on the east side of the Posey Tube. All the other paths are closed! The entrance to the one open path is on Harrison and 6th. Walk your bike and watch out for people coming in the opposite direction when you're on the path. It's very narrow and pretty much built for one way foot traffic, but there is two-way traffic on it, so watch out!