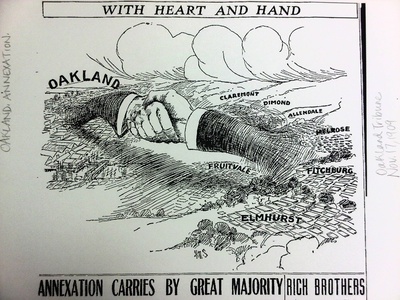 When Oakland was originally incorporated, first as a town and then as a city, the boundaries were much smaller than today. Its history of annexation includes the addition of several nearby towns and unincorporated areas, plus failed annexations of Berkeley, Alameda and Piedmont.

1852: The village of Contra Costa ("opposite shore") becomes Oakland, thanks to Horace Carpentier.

1854: By the Act entitled “An Act to Incorporate the City of Oakland,” approved March 25, 1854, Oakland changed from a “town” to a “city.” Its boundaries were described this way:

“Northerly, by a straight line drawn at right angles with Broadway, formerly Main Street, in said city, crossing the extended line of Broadway three hundred and sixty rods northerly from where stood the ‘Oak land House,’ on the northwest corner of Broadway and First Streets, and running from the bay of San Francisco, on the west, to the easterly or southeasterly line of that branch of the San Antonio Slough, or estuary, over which crosses the bridge from Oakland to Clinton; thence-along the eastern and southern highest-tide line of said slough, and of the estuary of San Antonio, following all the meanderings thereof to the mouth of said estuary, in the bay of San Francisco; thence southwesterly to ship channel; thence northerly along the line of ship channel to a point where the same intersects the said northerly boundary line extending westerly: provided, that nothing in this section contained shall be so construed as to prohibit or abridge the right of the Trustees of the town of Clinton and San Antonio, whenever the citizens thereof may elect to become a body corporate, under the provisions of any Act which may hereafter be passed, to provide for the construction of wharves and other improvements for the accommodation and convenience of the trade, travel, and commerce of the said towns or villages, at their respective sites.”5

1854: The town of Brooklyn annexes the town of Clinton.

1889: Annexation of “Berkeley, Temescal and all the adjacent territory to Oakland” proposed to Oakland Board of Trade by committees from Berkeley (including FK Shattuck) and Temescal. The Trade Board appointed a committee of Shattuck, Charles Newton and FJ Moffit to report back.6

1894: Berkeley declines to be annexed. City Council discusses the annexation of Temescal.1

1909: Elmhurst, Fruitvale, Melrose, Fitchburg (current Lockwood) and Claremont annexed.10 The surrounding districts voted to annex themselves to Oakland. Consequently, Oakland becomes the Second Largest City in the State of California.9 This annexation brought the city’s population to 300,000. The area increased to 60.7 square miles with 27 miles of total waterfront. The assessed valuation was $125,934,476. 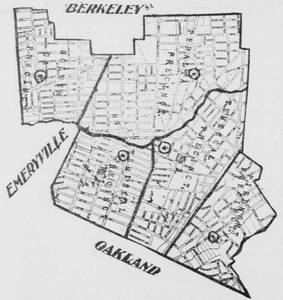 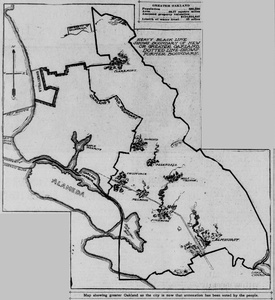 At various times Oakland attempted to annex Berkeley, Alameda and Piedmont. And at least once, San Francisco wanted to annex Oakland and much of the East Bay. 15

In 1909, a group called the “Berkeley Consolidation League” formed in favor of the consolidation of the two cities. The league believed that “an immediate union or amalgamation of Berkeley and Oakland is the first step toward a consolidated city and county,” and that it would lead to lower taxes and higher efficiency. They asked for a few concessions: they wanted the railroad to continue into Berkeley, deep-water docks to be developed for shipping, and for Berkeley to retain its identity. This would include the name, the extension of the limits of Berkeley to 55th Street, and the election of 3 representatives: one from each side of Shattuck Avenue and one at-large councilmember.4 In 1910, both Berkeley and Oakland held elections to determine whether Berkeley would be annexed to Oakland.2 Berkeley had attempted to stop the proceedings in Superior Court, but it turned out this was unnecessary as the consolidation/annexation was voted down.3

In 1893, Oakland considered separating from Alameda County and forming a city and county of Oakland much like San Francisco had done. According to the SF Call, January 7 1893 ”The proposed new county line runs along the bearing of Mills Seminary road, and includes the present townships of Alameda, Oakland, the greater portion of Brooklyn, the two Berkeleys, Temescal, Piedmont, Golden Gate, Lorin and Fruitvale. The next move after the creation of the new county is the proposed consolidation of all the existing communities in the said section to form a municipality to be known as the city and county of Oakland, second of that class in the State, the first being San Francisco. It is stated that there is much dissatisfaction with the present Oakland charter, which provides for too great expenditure for clerical services, and also an excessive rate of taxation. The advantages claimed for the new system of government are the single instead of dual system of taxation, and an averaging of property values beneficial to the entire community, and to the advancement of Oakland’s interests.” 8

Many business people in Oakland were enthusiastically in favor of the idea. People in the city of Alameda were against it, because they didn’t want to be burdened with Oakland’s debts and corruption (Horace Carpentier still being fresh in people’s minds). People in Livermore were against it, unless they could become the county seat of the new (remaining) Alameda County.

San Francisco long saw itself in competition with New York City, and was worried about the growing size and influence of Los Angeles. In 1912, SF tried to get the Wolfe Amendment passed, in order to make a greater unified Bay Area legal under the state constitution. The amendment failed to get the needed 2/3rds vote, but even if it had passed, the individual jurisdictions would still have to vote on it. 15 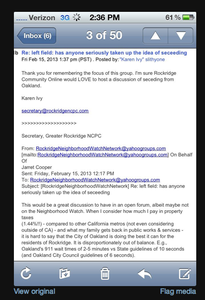 ”This would be a great discussion to have in an open forum, albeit maybe not on the Neighborhood Watch. When I consider how much I pay in property taxes (1.44%!!)- compared to any other California metros (not even considering outside of CA)- and what my family gets back in public works & services- it is hard to say that the City of Oakland is doing the best it can for the residents of Rockridge.” The secretary of the Greater Rockridge NCPC replied, “Thank you for remembering the focus of this group. I’m sure Rockridge Community Online would LOVE to host a discussion of seceding from Oakland.” (connotation of capital letters left to the imagination.) 7