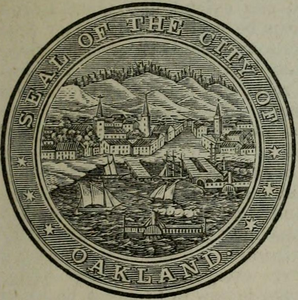 seal from 1874 directoryThe Town of Oakland was incorporated on May 4, 1852, based on the efforts of Horace Carpentier. Prior to passage of the bill creating the town, the area was a village known as “Contra Costa” (meaning the ‘other coast’). Note also that the village was then part of Contra Costa County, since Alameda County was not created until March 25, 1853. The boundaries of the town were as follows:

On the northeast by a straight line at right angles with Main street, running from the bay of San Francisco on the north to the southerly line of the San Antonio creek or estuary, crossing Main street at a point three hundred and sixty rods northeasterly from 'Oakland House', on the corner of Main and First streets, as represented on Portois' map1 of Contra Costa' on file in the office of the secretary of state; thence down the southerly line of said creek or slough to its mouth in the bay; thence to ship channel; thence northerly and easterly by the line of ship channel to a point where the same bisects the said northeastern boundary line.2

Northerly, by a straight line drawn at right angles with Broadway, formerly Main Street, in said city crossing the extended line of Broadway 360 rods northerly from where stood the Oakland House, on the northwest corner of Broadway and First Streets and running from the Bay of San Francisco on the west, to the easterly or southeasterly line of that branch of the San Antonio Slough, or estuary, over which crosses the bridge from Oakland to Clinton; thence along the eastern and southern highest-tide line of said slough, and of said estuary, in the Bay of San Francisco; thence southwesterly to ship channel; thence northerly along the line of ship channel to a point where the same intersects the said northerly boundary line extending westerly: Provided, that nothing in this section contained shall be so construed as to prohibit or abridge the right of the Trustees of the towns to Clinton and San Antonio, whenever the citizens thereof may elect to become a body corporate, under the provisions of any Act which may hereafter be passed, to provide for the construction of wharves and other improvements for the accommodation and convenience of the trade, travel and commerce of the said towns or villages, at their respective sites.