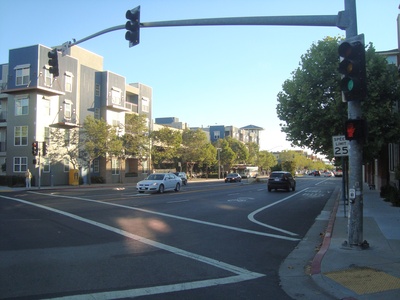 such Emeryville (photo by mk30)

Emeryville (otherwise known as E'ville) is a city surrounded by Oakland, Berkeley and the San Francisco Bay that should have been annexed by Oakland. This is where Oaklanders go if they have no other options than to shop at Big Box Stores, notably IKEA, which are relatively rare within the confines of Oakland.

Ah, but if Emeryville had been annexed and made subject to Oakland’s rules, it could not otherwise have developed such a long, sordid history of serving various – often shady – purposes for Oakland: by staying separate, it has at various times provided gambling; bordellos; speakeasies; tax dodges; kickbacks; legal loopholes, and other fun stuff Oakland wanted a piece of, while at the same time denying involvement with, or jurisdiction over. In other words, Emeryville’s sovereignty has historically helped maintain Oakland’s plausible deniability. 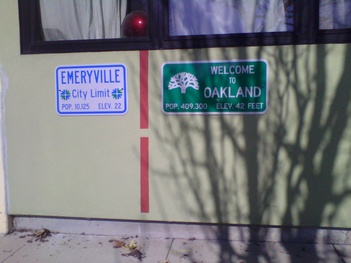 The Oakland-Emeryville border drawn onto the Border Apartments at 42nd St. & Adeline St.Historically, whenever anything bad in Emeryville happens, E'Ville brass and residents alike claim that it happened "on the border of Oakland" (which it probably did, since Emeryville is so small that everywhere is on the border of Oakland) or that Oakland residents were involved (which they probably were, since only 5 people live in Emeryville). Further, they've made it even easier to get credit and pass blame by structuring developments like the big boxes on San Pablo and the Ikea so that the stores themselves are in Emeryville and the parking lots are in Oakland: tax dollars are split with Emeryville 2 but incidents occurring in the parking lots (like a homicide outside of Ikea 1) fall in Oakland's jurisdiction. When something bad happens in Emeryville and it's not close to Oakland? Well, no one cares! Then they complain that no one cares! 3 Must be nice.